Someone has to die in order that the rest of us should value Wriphe more.

Sadly, these shorts were sold out by the time I spotted them on DHGate.com* at the bargain prices of $2.68 (with free shipping!): 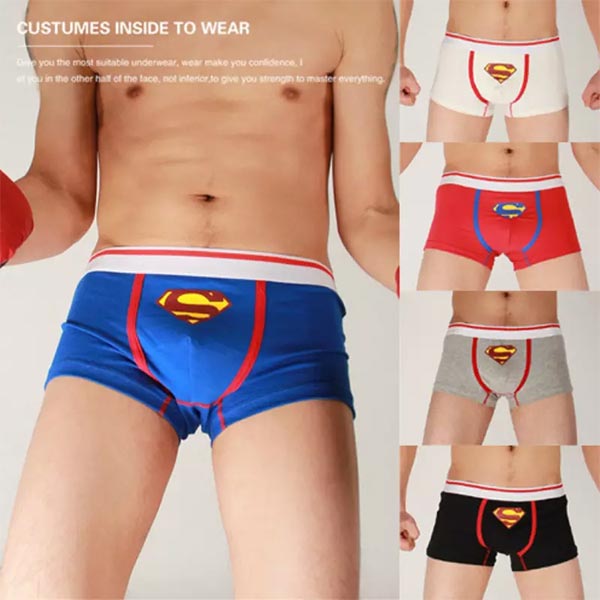 *DHGate, for those of you who don't live on the Internet, is an online marketplace like Amazon.com for Chinese manufacturers seeking to unload surplus goods to resellers. This is where sweatshops sell their knockoff shoes after they've fulfilled their orders for Ivanka Trump. For example, compare these shorts with the $14.99 pair you'll find from SuperHeroStuff on Amazon.com.

And while I do want to wear Superman's shorts, I post this pic mainly because of the delightful Engrish catalog text.

CUSTUMES INSIDE TO WEAR
Give you the most suitable underwear, wear make you confidence. I
of you in the other half of the face, not inferior, to give you strength to master everything.

It takes a Superman to understand what that is trying to say.

Six days ago, I insinuated that anyone who wore a pair of those "Man of Steel" briefs must frequent hookers. One of my readers took umbrage with my statement and sent me the following image as proof: 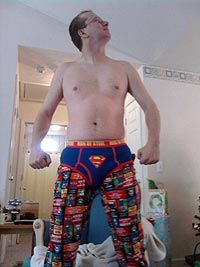 I stand by my statement.

Why do I have a Superman Month? Because in my daily life, I have telephone conversations in which I discuss the existence of adult Underoos. Behold:

Of course, that's a Supergirl costume. These things actually exist (they can be purchased here) and yes, they are licensed by DC Comics. But don't worry, they make something for the boys, too.

Seriously, this underwear is every dick joke rolled into one convenient package, pun intended. Also available here, it takes a certain kind of man to wear these things in private, much less over his tights. A giant "S" emblem exactly over the business end and a waistband that reads "Man of Steel"? Subtle. Something tells me that the wearer of these bad boys frequents hookers.

But I'm not saying that I don't want a pair very, very desperately. "Up, up and away!"

In honor of Pope Victor (who first decided that Easter would be celebrated on a Sunday), I interrupt your Day of the Lepus celebration with the following long-form complaint about chicks.

Why does Victoria's Secret mail out catalogues every month? Who buys underwear that often? A quick web search reveals that they mail over 400 million catalogues each year. (A mere 33 million catalogues per month.) The population of the entire United States of America -- men, women, and children combined -- is slightly over 300 million.

I'm not the sort to lament the overgrowth of landfills (I hope everyone drowns in their own filth) or mourn the destruction of a tree (I hate trees, too). But it seems to me that mailing endless piles of catalogues with pictures so heavily airbrushed as to be considered paintings of impossibly-shaped people (we called you ugly in high school because you were, ladies) in order to market push-up bras to women concerned that their chests are too small could probably be a sign of the apocalypse (if one were so inclined to be looking for those sorts of things).

That is all. You may now resume your regularly scheduled pastel-tinted activities.

I was just searching Amazon.com for the movie Side Out (with C. Thomas Howell), and my search returned a listing for crotchless panties. (God bless the internet.) Which, naturally, got me thinking about crotchless panties. What exactly is the point of these things? It has all of the bulk of underwear and none of the function. (But what a breeze!) I like easy access, but why wear panties at all if they are simply going to have a big hole in them? When my underwear develops holes, I throw it away. I've always said that I think people look more appealing with some clothing on, but this is not at all what I had in mind.

Amusingly, under "Features," Amazon lists the following for the "String of Bubbles" crotchless panty:

Certainly, none of these "Features" answers any of my questions. But ladies, so long as you can have an excuse to wear more jewelry ("Ooh! Shiny!"), why not crotchless panties?