After all, it's all kinds of things that make up a Wriphe, right?

I'll have another post tomorrow, but I just wanted to take this opportunity to kick Old Man 2011 in the nuts as he limps out the door. Call it a learning experience for Baby New Year. Shape up, young man, or you'll get more of the same in 12 months. Punk.

While browsing the internet to find the etymology for the neologism "trickeration" -- currently my least favorite word in the English language -- I discovered that Jason Taylor has announced that he will retire after Sunday's game. So the horrible 2011 season will claim one last player before it's all over.

Taylor will retire with the second most starts ever as a Miami Dolphin. If Taylor hadn't spent one season each with the Redskins and Jets, he'd need only 1 more season to pass Dan Marino's 242 games as a Dolphins' starter. Seeing as this is the year that the most significant of Marino's remaining passing records falls, it seems a missed opportunity not to eliminate his other records from the books. At the rate that the Dolphins discard their players these days, perhaps that's the Marino record that is truly unbeatable.

This is the fifth time I've blogged about Jason Taylor. It will probably be the last, if Taylor is smart enough to stay away from an organization that rewarded him with a trade to the Redskins just 1 year after the NFL made Taylor into a 26-feet tall robot. It's a shame that Taylor can't ride off into the sunset with a championship ring, but that's what happens to modern Hall of Famers in Miami. It sucks, Jason, but you just sort of get used to it.

Christmas went well: everyone got along all day. We opened presents, we ate a great meal, we enjoyed some football. It is an unusual holiday for us when no one raises their voice: my family gatherings usually end like a Greek tragedy. Naturally, that couldn't last.

The season's good mood came unraveled yesterday evening, when Mom finally threw Dad out of her house after Trey and Dad got into a fight over Dad's open-mindedness concerning our religious beliefs and Dad damned me to burn in Hell for calling him "full of shit." At least now it feels more like Christmas.

Has anyone else noticed that Best Buy hates Santa Claus? Their current seasonal ad campaign has customers taunting Santa with electronic gifts and throwing his effigy off a roof. What the fuck, Best Buy?

Why, during the gift-giving season in another year amid a seemingly eternally underperforming economy, why would you hate on Santa Claus? Santa Claus, the beloved Father Christmas figure of millions. Santa Claus, who brings toys to deserving children. Santa Claus, twinkle-eyed, merry-cheeked jolly old elf!

I'm not the biggest fan of Christmas. However, I'm also not about to throw Santa under the bus just try to sell more cell phones. Know when you're outclassed, Best Buy. Some executive will definitely be getting coal in his stocking.

From here on out, I'm going to make an effort to make my posts more cohesive. Looking back, it appears to me that my blog posts ramble all over the place. For example, take a look at something I've blogged about many times over the years, something like movies. Sure, most of what you'll see is my predictably negative feedback about how much I hated whatever super-hero movie I just watched. Only occasionally I meander off and talk about Golden Globes or Eddie Murphy's head. And I never talk about how much I like The Adventures of Ford Fairlane or Beautiful Girls. Well, until now.

Maybe when I start typing, I should write down a topic sentence. That way when I wander too far from the plot, like Terminator 2: Judgement Day, I can remind myself where I was going. Although people seem to like Terminator 2, despite the fact that its story takes a 90° turn about halfway through and appears to destroy its own premise. If Sarah Connor destroys the research that leads to terminators, she can't have been harassed by terminators from her future and a whole lot of people will have wasted a few hours in a dark theater.

I find that long-winded obfuscation of the actual point is a flaw in most of Cameron's scripts. I like True Lies, but it also takes a right turn about halfway through. More accurately, I suppose what I object to is the subplot in which Arnold Schwarzenegger and his crack team stalk his wife when the main plot is about a terroristic threat to the United States. If spend our time worrying about who loves us, then we've let the terrorists win.

Couple my distaste for Cameron's screenwriting with the public's overboard response, and it should be easy to understand why I still haven't seen Avatar. Call it a personality quirk, call it a character fault, call it curmudgeonly pigheadedness. If the silent majority decides to like something, I'll decide to hate it. And once I decide that I'm going to do something, it's a done deal.

Wait. What was I saying? 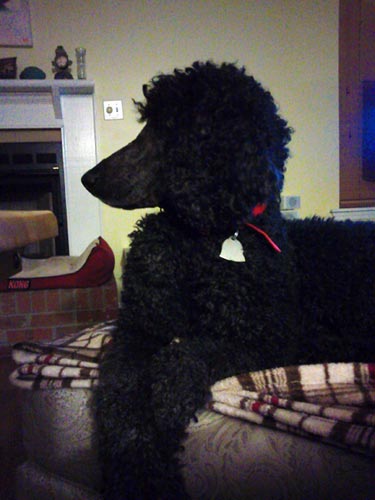 It's July in December.

The fast food industry is under fire for marketing their delicious death-meat to children. Rather than actually ceasing the marketing of their gateway drug to kids, the industry has decided to discourage the purchase of kids' meals by making them boring.

Mom brought home a Happy Meal bag that had no games on it, just trivia about apples. Gee, not all apples are red? Well, no shit. McDonald's, even I'm not so old enough that I think apple trivia would be fun for kids.

Meanwhile, I just got this tray liner at Burger King in support of their new and unexciting "Crown Meal." Click on the dots below to connect them.

Disclaimer: It's not as much fun as you remember.

What I see is a really lame excuse for a connect-the-dots picture. I might as well be drawing a picture of the trash can.

Elsewhere on this same placemat is another fun game: "Give all of your family members nicknames!" Burger King's suggestion? "Hot Feet." If that Mad Lib doesn't keep you from enjoying your Whopper Jr., nothing will.

Name the Broadway play about Rugby that appeared on the 1973 cover of Sports Illustrated."

Despite having nothing about to do with boxing, that question about "The Changing Room" appears on the "boxing" card. Technically, that's not even a sports question, so how about another?

Who finished as the runner up behind John Daly in the 1991 PGA Championship?

Of course, everyone knows that the answer to that question is Bruce Lietzke, right? Wikipedia tells me that second place finish was Lietzke's best finish in a major ever, so how dare I not know his name! Maybe I should stick to football questions.

The Chicago Bears routed the Washington Redskins in the 1940 NFL Championship Game. What was the score?

I finally returned to Miami on Sunday, and despite my previous declaration to the contrary, I forgot to bring a snorkel. Miami, however, remembered to bring the rain, at least through the first quarter. The rain stopped just in time for the Eagles to score 21 points in the second quarter, allowing the sun to come out and bake those of us stupid enough to sit through the rest of the game.

It didn't help the experience that I was surrounded by idiots and assholes. Behind me sat some pre-teen children who cheered for the Eagles despite no awareness of when it was appropriate to start screaming. (I know they were true Philadelphia fans when they began discussing how they would kill the Dolphin's mascot given the chance.) The group in front of me spent all game screaming trash-talk, mainly at women. (Between taunts, they discussed the best strip clubs in the various NFL cities they had visited.) The douche to my right, an *ahem* Atlanta Falcons fan, tried to convince everyone around him that he was a true Falcons fan because he owned an officially branded pair of Falcons socks. (However, he spent more time discussing the NBA and the necessity of "respect" than the game.) And the fellow to Trey's left spent the entire game texting, never looking at the field. (Although he did frequently ask Trey to update him about what had just happened.)

As we began the 9-hour drive back home immediately after the game, Trey made me promise that the next time we take one of these cross-country trips to a game, we have to spend at least as much time in the city as it takes us to get there. That means that I have about 4 years to come up with something to do for 2 days in Philadelphia. At the very least, I know that I'll need to buy some Eagles' gear; after 12 hours in Philly, I suspect anyone wearing any other teams' colors might get shot.

It wasn't until Trey and I stopped at a rest station just south of Jacksonville that I actually interacted with someone who didn't irritate me. There I met a season ticket holder who has been traveling the 5 hours between Jacksonville and Miami since 1971. He dryly mentioned that he's seen a lot of bad football lately, a reference to the fact the day's loss ensured a third consecutive losing season for the franchise for the first time since 1969. Despite that, he said that he looks forward to future wins, and I guess that's what being a fan really means. I couldn't tell if he was wearing Dolphins' socks.