The New Year's Eve television coverage leaves me cold as well. I don't care to listen to rock concerts. I don't care to watch radio DJs. And I have no idea what Anderson Cooper and Kathy Griffen have in common, but I'm pretty sure that I don't care.

That said, there is something to look forward to on television on New Year's Eve: University of Georgia football! Georgia has been invited to the Liberty Bowl this year to battle the University of Central Florida. Consider the following facts:

What does all that mean? Hell if I know. But get out of the way, Dick Clark; here come the Bulldogs!

Bonus Trivia note: This is the first time in the Liberty Bowl's 52 year history that it will be held twice in the same year. The 2009 Liberty Bowl was played January 2, 2010.

Amazon.com announced yesterday that the Kindle v3 is their best-selling product ever. I'm pretty sure that means that I now have to hate it. Damn it. I was really getting use to reading Kindle in bed.

The previous best-seller for Amazon was Harry Potter and the Deathly Hallows. That book has sold more than 44 million copies worldwide, so maybe that gives some idea of how many Kindles have been sold. We have to guess because Amazon hasn't told us.

Of course, Amazon saying that their best selling item is their own Kindle would be like the United States government announcing that the best selling car in America was a government-subsidized Chevy Volt. There's a bit of a credibility gap when the manufacturer is the one telling everyone how much everyone loves the product.

So now I have my choice of morals for this story: either I'm allowed to like the Kindle because it isn't really selling well, or I might like a Chevy Volt because popular things aren't so bad as I'm inclined to think that they are. Next time you see me, take a look at what car I'm driving to see which lesson I eventually learned.

Jackie Posted Dec. 30, 2010 at 06:33:49 PM
Adam lives for his Kindle, but I just can't quite bring myself to jump on the bandwagon. Largely this is because I want to throw up in my mouth a little every time I go to Amazon (which is several times a day) and the first thing they do is try to sell me a Kindle. Like they're trying to break down my spirit until I give in and buy the thing.

However, I got an iPad for Christmas from Adam. Apple, kings of we'll-pressure-you-into-loving-this-trend-OR-ELSE, doesn't have anything else I want on the site (besides movie trailers) so I don't have to see the sales tactics every other minute. I think this will help me live with this gift. Also, it's freaking awesome.

'Twas the night before Christmas, and I finished my book: Murder in Coweta County. (I personally like a little light reading before my holidays with the family.) Fortunately for me, it was replaced Christmas morn with a new Amazon Kindle.

The Kindle was purchased for me by my brother's girlfriend. My gift to her this Christmas was a box of Q-Tips. Not even a full box, mind you, but one of those half-sized "vanity" boxes. So I gave the gift of clean ears and received the gift of a very disgruntled glare. That's a pretty fair trade, if you ask me.

Last year I think I gave Leslie a bag of candy, and she gave me a video game. There must be some law of inverse exchanges between Leslie and me; the cheaper the gift that I give her, the greater the gift I get in return. Next year I'll try buying her penny candy to see if I can get a new car in the exchange.

"What are my views on fake breasts? Depends what my view of them is!"
-- David Hasselhoff to Camilla Long of the Ottawa Citizen

Ah, the Hoff has still got it! Sadly, he doesn't have it on TV anymore. Hasselhoff's reality television show, The Hoffs has been canceled after just 2 episodes were aired. Apparently The Hoffs was no Anna Nicole Smith Show. That should be a good thing, right?.

Of course this news was shortly followed by the news that Hasselhoff will be one of Simon Cowell's replacements on Britain's Got Talent. Hasselhoff had left America's Got Talent to star in The Hoffs, so this is something of a full circle for Hassellhoff. At this rate, I have to expect Baywatch: The Next Generation to be in the works sortly.

At my mother's request, I built a relatively simple countdown timer in a web-embedded Flash application last week. Unable to leave well enough alone, I kept building and building until I arrived at a cookie-based app that I am making freely available to you, my adoring blog readers. Consider it my Christmas present to you.

The countdown is based on a cookie that you will set by running the page. The edit function re-writes the cookie. So what you set the counter for will be stored in your browser only. In addition to keeping your privacy, this means that you can use two different browsers to set two different counters simultaneously! And yes, there is a mute button, if the sound of the seconds of your life ticking away gets on your nerves.

You can find the app at www.wriphe.com/timer/. Bookmark it.

Infatuation of the season: 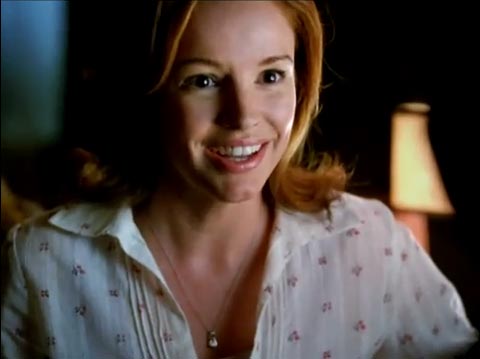 A brief (2-3 hours) search of multiple sources on the internet reveals that the girl who appears in the first 8 seconds of the Zales "Oh My Gosh" commercial (which you can see here) is named Cassidy Brown. I don't think I've ever seen her in anything else (her television/movie acting credits are limited), but her performance here certainly makes me want to give her jewelry. Oh my gosh, indeed.

Research note: Cassidy Brown doesn't have a lot of acting credits, but there's some good word of mouth about her on imdb.com. I don't know where she found time to act in a commercial since she's has also been recently working on the independent film Girlfriend 19 for a few months. (How far in advance do they shoot Christmas commercials?) And she has a Facebook page.

It's not stalking if it can be googled.

Battle lines are being drawn between the pro- and anti-deer contingents. Like any conflict resulting in a loss of life, the bleeding hearts protest intellectively as the warmongers march. Fortunately, the Fourth Estate is present to chronicle the affair for posterity. The following snippets were taken directly from editions of the Newnan Times-Herald last week.

I am concerned for the safety of deer. I was traveling from Atlanta to LaGrange on Nov. 14 around 10 a.m. I could not believe how many dead deer I saw dismembered along the highway from Newnan to LaGrange. I wished I had my camera to film the sight. The highway lanes were a bloody mess. I know the county makes enough money to build fences or walls to keep the adult deer and their babies safe. -- " Animal lover concerned about deer," December 4, 2010

That is what it sounds like when doves cry. The response from the opposition hawks was, like life itself, straightforward and brutal. There will be no quarter for the deer!

Yes, it is disconcerting to see dead dear along the highways, as a previous letter stated, but we are viewing the unintended consequences of community growth and building high-speed highways through the habitats of all kinds of wild critters. It is cost-prohibitive to erect fences or walls to protect them. Even if governments had the money, I'm sure they would spend it on more worthwhile causes. -- "Deer die from loss of habitat," December 11, 2010

In other words, who are deer to stand in the way of the steel wheels of progress? Let the heathen savages be beaten back; they have no right to the land of their forefathers! Manifest Destiny yields to no one, man or cervine.

Let's learn cause and effect with Superboy in "The Cigar that Killed Superboy!"

Ever hear of carcinoma, Superboy? As Pa Kent learned the hard way, lung cancer is the most common cancer-related death in America. Remember kids, "super-convenience" may seem swell, but you'll feel far less guilty if you make your parents get their own matches! Better luck with your next set of parents, Kal-El!

I now have a new laptop. It has 3x the processor speed, 4x the memory, and 12x the storage space of my nearly tween-aged desktop. I'm sure that if my previous computer weren't dead, it'd be envious.

During the week that I was without a computer, I finished a video game, worked on an oil painting, baked a cake, completed most of my Christmas shopping, caught up on a bunch of tv, and read a book. I'd nearly forgotten how much I liked books. Naturally, this made me wonder if perhaps I wasn't spending too much time on the computer. But my new machine came with Amazon's Kindle for PC app, so now I can read books on my computer! Dilemma solved.