Wriphe is not so much a riddle to be read as a Gordian knote that will get cut sooner or later.

An editorial cartoon in the newspaper got me to thinking about how Superman would handle something like the COVID-19 outbreak. In the cartoon, he was staying home to prevent the further spread of the disease. That's cute, but it's frankly a waste of Superman's power. No one who can hold his breath indefinitely as he flies through the Sun to disinfect himself needs to worry about a shortage of Purell.

Ironically enough, a plague was among the problems that Superman 2020 had to deal with in the far flung future of... 2021.

Remember Superman 2020, aka Superman III? He's Superman's grandson, the son of the son of Superman. We last discussed his adventures, written at the dawn of the 1980s, in January. (You know, way back when the threat to the world was white supremacy. Damn. What's it going to be by July? My bet is on Godzilla.)

Anyway, at the end of his first year in action, Superman was confronted with an uncomfortably familiar danger when the doors of the closed city of New Metropolis were opened on New Year's Day 2021, and everyone in the city was found dead. 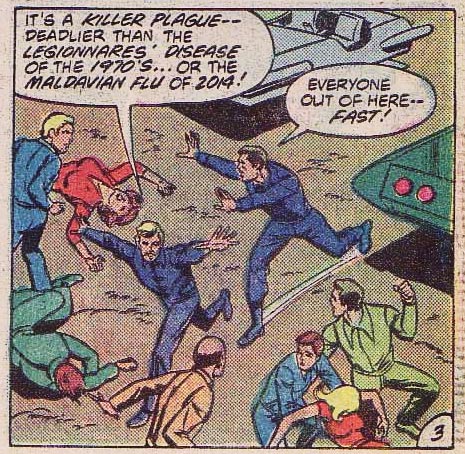 I did mention this was written in 1982, right? Legionnaires Disease was discovered in an outbreak in 1976 which killed 15% of the original cases. Thirteen thousand cases are diagnosed per year in the US, and modern techniques have squeezed that fatality rate down to about 10%. (For comparison, COVID-19 is still killing under 2% by most reckoning, though it has infected over 26,900 Americans in the past three months alone.)

Maldavia did indeed have a 21st-century outbreak of flu that shut down the country and killed 6% of those infected, though that was in 2017, not 2014. Still, I'd say that's close enough that Nostradamus would have gotten credit for the prediction.

Remember those white supremacists I was speaking of earlier? Superman made about as much progress defeating them as Spike Lee did. When the hero arrives to help the panicked population, those dicks were quick to rush to social media to throw blame. (Life imitating art, or the other way 'round?) 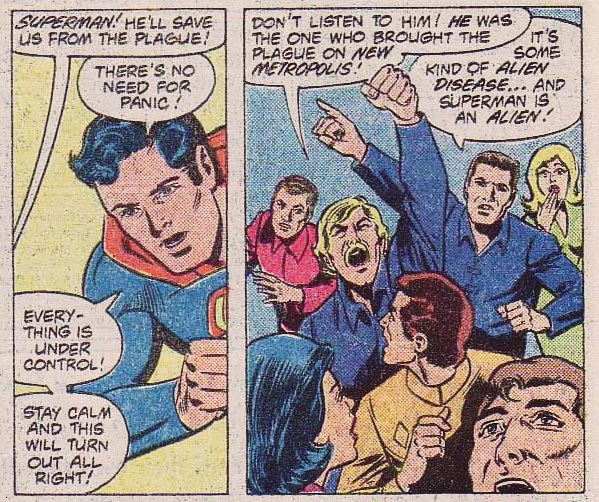 Hey, if he were really at fault, I'm sure the authorities would have called it the "Superman Virus" in public addresses instead of referring to it by its scientific name. Because authorities have a responsibility not to mislead the public. Or so I've heard.

It turns out that Superman isn't the cause of the virus but the solution. Using his aforementioned super-breath, he distributes the cure throughout Metropolis' atmosphere, causing it to literally rain medicine.

It only took Superman eight pages to thwart a plague and save the world, proving that you can save everyone without a single test kit so long as you have one Man of Steel. My hero.

CAESAR
What man is that?

BRUTUS
A soothsayer bids you beware the ides of March.

CAESAR
Set him before me; let me see his face.

CASSIUS
Fellow, come from the throng; look upon Caesar.

CAESAR
What say'st thou to me now? Speak once again.

SOOTHSAYER
I said, "Beware the COV-IDs of March!"

BRUTUS
(draws a knife)
That pun was a tragedy!

CAESAR
(bleeding to death)
In hindsight, this social distancing idea could have some merit.

Comments (0) | Leave a Comment | Tags: covid19 how it should have ended illness news shakespeare

Friday, the President of the United States had an hour long press conference to reassure the American population about his government's response to the Coronavirus outbreak. He told us Google was helping the administration develop a screening website to advise users on their symptoms. He said Google had 1700 engineers working on the site, and it would be done quickly, unlike the troubled roll-out of Heathcare.gov. He had his Coronavirus Response Coordinator show a chart detailing the process the website would use.

One day later it has been revealed that there is no website.

Yeah, my confidence is restored.

Says the President of the United States in a live address to the American people at 9PM EDT:

We will be suspending all travel from Europe to the United States for the next 30 days. The new rules will go into effect Friday at midnight. These restrictions will be adjusted subject to conditions on the ground. There will be exemptions for Americans who have undergone appropriate screenings, and these prohibitions will not only apply to the tremendous amount of trade and cargo, but various other things as we get approval.

Says the President of the United States in a tweet to the American people at 10:15PM EDT:

Hoping to get the payroll tax cut approved by both Republicans and Democrats, and please remember, very important for all countries & businesses to know that trade will in no way be affected by the 30-day restriction on travel from Europe. The restriction stops people not goods.

The takeaway: The President of the United States revealed on television that we trade people.

While I'm glad that he's finally taking a global pandemic seriously, I wish it wasn't the Cholera pandemic of 1849.

Just after noon Retired detective Ken Worthy had just exited a McDonald's in the small town of Locust, North Carolina — "A City With a Soul" — when he was ambushed by a deer.

"We were walking out with our Cokes," said the victim, "and, uh, you look both ways and I... my wife caught a look. I looked literally just saw him the last second, and he collided with me. I was down."

Sure, this deer drive-by looks comical because it didn't happen to you, but don't be fooled! Any attack on Coca-Cola and McDonald's is an attack on America!

They can take our Cokes, but they can never take our freedom!

cam Posted Feb. 13, 2020 at 04:13:11 PM
Walter, No entry about a July and Audrey look-a-likes in the final round at Westminster Dog Show. Then July won. She is prettier than Siba will that silly coat clip

Wriphe [Official Comment]: Posted Feb. 13, 2020 at 05:30:58 PM
Thank you! I figured Westminster would be my next poodle strip. Mom and I were having quite the rivalry on the sofa. But I do have to say that the best dog won, 'natch.

The impeachment trial of Donald John Trump on the charges of abuse of power and obstruction of congress begins today, January 22, 2020.

"On the day President Trump was inaugurated, the headline of the Washington Post said, 'The campaign to impeach President Trump has begun.' After that, we saw two years of the Mueller Investigation, and now we've seen this year wasted on this ridiculous investigation and these puny articles of impeachment."

"While I've only been in Washington for a couple of weeks, it's abundantly clear that impeachment is a partisan exercise to undermine @realDonaldTrump and his agenda. It's time to end the taxpayer funded political games and get Congress back to work for the American people."

"Do you solemnly swear that in all things appertaining to the trial of the impeachment of Donald John Trump, now pending, you will do impartial justice according to the constitution and laws, so help you God?"

Oath willingly sworn to by all sitting U.S. Senators, January 16, 2020

Definition of "impartial," prior to 1600

For the record, I think the defendant is guilty as sin, but I haven't sworn any oaths.

In 1914, the countries of Serbia and Austria-Hungary were at each other's throats as they vied for political dominance in their overlapping spheres of influence.

Though no one could have predicted the horrors the future held for the two countries that started The War to End All Wars, the assassination was particularly unexpected considering that just a few years prior, Alexander had criticized his predecessor's own ulterior motives for war in this response to a question from his national press:

My father will start a war with Austria-Hungary because he has absolutely no ability to negotiate. He's weak and ineffective. We have a real problem in the kingdom. So, I believe that he will attack Austria-Hungary sometime prior to the end of his reign because he thinks that's the only way he can maintain power. Isn't it pathetic?

Because that's how grown-ups talk.

And so begins a series of backup stories first appearing in Superman #354, released 40 years ago.

It's easy to look at this series by Superman stalwarts Julie Schwartz and Curt Swan and see what the old-timers got wrong about the far flung future forty years forthcoming. (Sorry. You can't talk about Silver Age comics without a lot of alliteration.) Flying cars, domed cities, and passenger flights around the moon are still more dream than reality.

What is considerably more impressive is what they got right about contemporary life, and I don't mean the giant flat-screen TVs.

Superman-III's main antagonists aren't mad scientist or sentient computers. No, in the "future," Superman still has his hands full with intolerant Nazis. Their rhetoric would sound crazy if it wasn't something we heard every day on Twitter and Facebook and White House press releases.

Or saw at Navy football games.

Despite the predictions of many over the years (myself included), comic books still exist in 2020. And it's a good thing, too. We need the Man of Tomorrow as much as ever to lead us in the never-ending battle for Truth, Justice, and the American way. 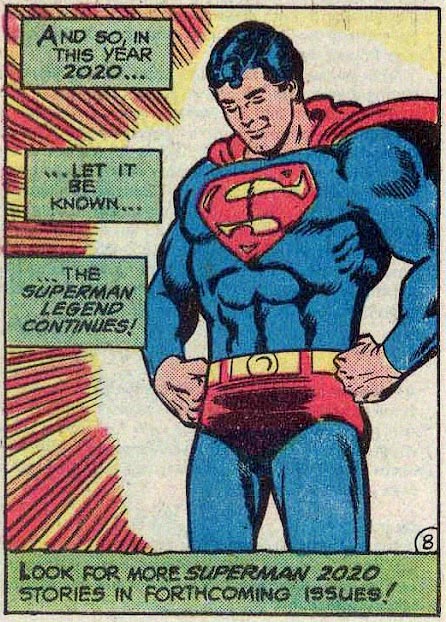 "But for the most part, you have many states where they have so much water that it comes down — it's called rain — that they don't know, they don't know what to do with it."

Quote by the PRESIDENT OF THE UNITED STATES on December 6, 2019 as part of a speech justifying rolling back EPA water regulations.

Sadly, you can't impeach someone just because they're stupid. (Though corrupt and dishonorable seem to work.)