On Tuesday, November 2, the initial College Football Playoff rankings of the 2022 season were released, and the Tennessee Volunteers leapfrogged the Georgia Bulldogs, who were atop the Associated Press poll, to become the top-ranked football team in the country.

Then they played Georgia on a soggy Saturday afternoon in Athens.

To be the best, you've got to beat the best, Vols. And you didn't. Final score: Tennessee 13, UGA 27. Honestly, it wasn't really even that close.

Driven in no small part by the chip on Bulldogs fans' shoulders, the game atmosphere was truly great, the best in years. The enthusastic fans were really into the game from long before kickoff, were only made more rabid when the refs stole a safety from Georgia in the second quarter, and somehow managed to get even more energetic when the rain started falling in the third quarter. What a bunch of damn good dawgs!

Reminder to future Walter: This is why you buy season tickets, to go to games like this one. Fantastic.

Thanks to friend James for keeping me company in the rain. I certainly enjoyed myself.

Today was the 100th annual Georgia Homecoming football game. As is often the case, it was against Vanderbilt, who played UGA in the very first homecoming game on November 18, 1922. As is often the case, the Bulldogs won big. (To be fair, Vandy won 12-0 in 1922, and went on to finish the season undefeated, their second undefeated season in a row. Obviously, 1922 was a different time.) 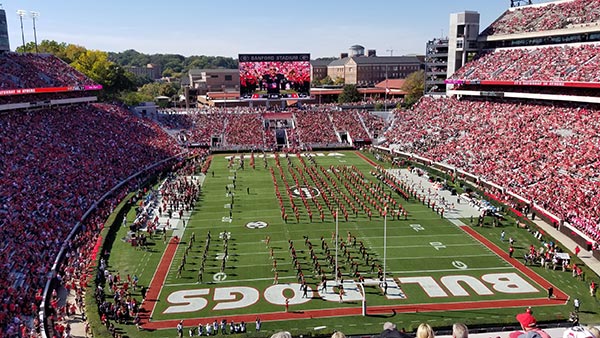 One thing worth documenting: As I've mentioned before, UGA has replaced paper tickets with e-tickets, accessible only on smartphones. I had both tickets on my phone, and both had to be scanned for Mom and me to enter the stadium. However, after scanning the first ticket, my phone received a text notification... which temporarily locked out the ticket app. Oops! It was no big deal at the time — we were, in fact, the only people in our line — but this presages potential trouble on a busier day when, say, a boisterous (read: drunk) Tennessee crowd comes to town.

From now on, airplane mode.

(Side note: It didn't help anything that my phone case broke on Wednesday. So I did what anyone would do and fixed my smartphone with duct tape. It really is good for everything!)

Today I returned to Sanford Stadium for the first time since November 9, 2019. This is the view from my newest tickets, 12 rows closer than the seats I had since 2002. 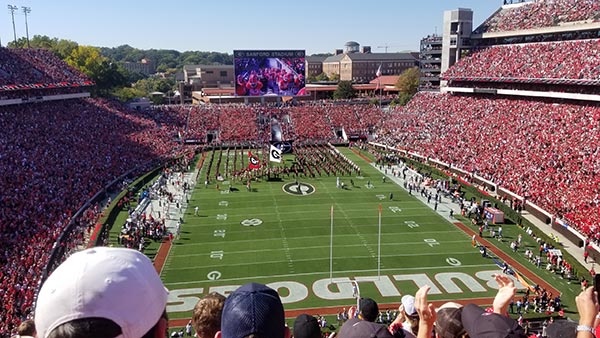 Wow, what a difference!

I was looking forward to this one, what with Auburn coming to town for something like the 126th time. To bolster my courage to go out in public again, I got Omicron boosted 2 weeks ago. I also got a flu shot. And, for good measure, a tetanus shot. Because, you know, some dawgs bite. Especially the drunk ones.

I wish I could I could tell you that I had a great time, but that wouldn't be true. The drive to Athens started me in a bad mood because I was my usually anxious pre-game self (that hasn't changed for the better in the past three years). Traffic (and my innate struggles at time management) meant that I arrived in Athens with barely enough time to sprint into the stadium before kickoff.

To make matters worse, since my last visit, Sanford Stadium has gone paperless and cashless, and it only seems to have slowed ticket taking and concession buying. Welcome to the future!

To make matters worst, after standing in a concessionaire's line for five minutes to buy a Coke, I discovered that particular concessionaire had sold out of regular Coke. "Will a Diet Coke do?" You might as well ask me if Pepsi is okay. IT. IS. NOT.

On the up side, Auburn did bring a marching band that performed at halftime, complete with a flag corps that had a real hard time holding onto their flags. I did enjoy that while I drank my Coca-Cola Dasani water.

I might have had more fun if I hadn't gone alone, if I had taken someone to bitch to. But I think the real lesson here is that I shouldn't go to games that have a 30 point spread. Frankly, Auburn is not good this year (especially since they're down to their third string quarterback), and UGA played down to their level for most of the game, striping the on-field product of any significant entertainment value. If the football game isn't any good, there really isn't any reason to spend 5 hours on the road and 4 hours in the sun watching it.

I had something I was going to say here today, but when I sat down to type it out... I forgot what I was.

So have this picture of yesterday's sunset sky instead.

Maybe I'll remember what I meant to say next time.

Believe it or not, we've finally reached the 17th Annual Wriphe.com Batman and Football Month. Am I excited? You betcha.

Earlier this year, the University of Georgia Alumni Association urged me to take a picture of myself "Calling the Dawgs" to drum up support for giving more money to an institution with over a billion dollars in endowment. (If you have a billion dollars what do you need more for? Is UGA planning on starting a space program?)

But I'm a loyal dog. So since I'm not on Facebook or Friendster or whatever the kids are doing these days, here's my picture on my own anti-social media.

Now that I've done as you asked, put those unpaid football players* who earned the University $46 million in net profit last year back to work for my entertainment!

*Okay, fine. They get Tuition and Living Expenses out of the deal. For an average student, that's about $27,600 in value. So it's not like they get nothing. But $46 million in profit could pay for an additional... 1.6 thousand students. That'd be a big football team!