In Wriphe, you either have the results you want,
or you have the reasons to explain why you don't have them.

Only one team showed up to play in the annual Georgia/Missouri game. Luckily for Georgia fans, it was Georgia. Final score: Missouri 0, Georgia 27. 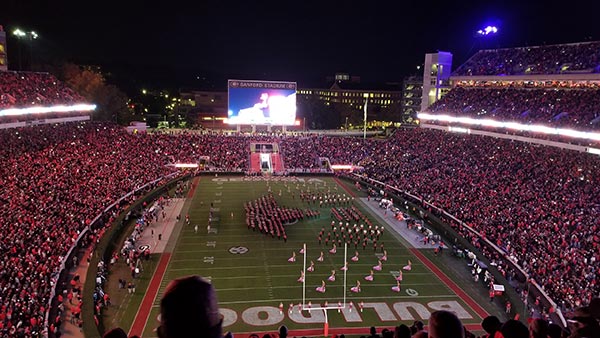 Above see the blue lights rolled out for the Veteran's Day ceremony at halftime. You know, this was the sixth home game of the 2019 season and I have yet to see an opponent's band on the field. Do schools not have bands anymore?

My guest for the evening game was Friend James (aka the man who paid me to make this), who had never attended a football game before. I spent most of the game explaining it, which was fine. With only one team on the field, there wasn't that much to see.

Not that I'm complaining about the Bulldogs pitching a shut out, mind you. It was just cold — very cold — and it would have been nice to have something to jump up and down about.

Whew. A 53-28 Georgia win shouldn't be stressful. It should be easy, a walkover that you can leave before the fourth quarter knowing the second string can put it away. Not so much this one. 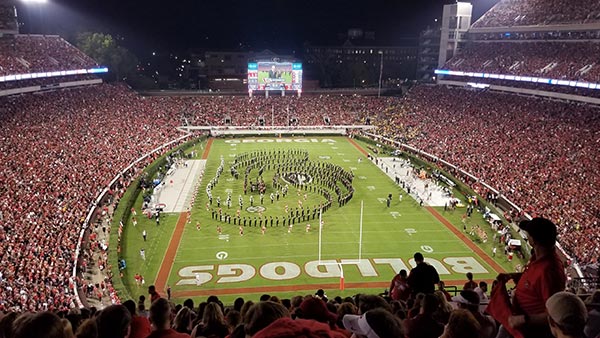 Four teams ranked inside the top ten lost to unranked opponents this weekend, and during the first half of tonight's game, I was terrified that UGA would be a fifth. Missouri, 1-5 on the season and a 30-point underdog against 4th-ranked, undefeated Georgia, scored on three consecutive drives in the first half to tie the game at 21-21. I admit it; I was watching through my fingers.

Fortunately, the UGA defense finally applied the brakes, and when the homecoming court took the field at halftime, the score was 21-34. Missouri was never a threat again.

I think being undefeated on the season is starting to give me an ulcer. I don't know that I can take many more blowout victories like this. Up next: Florida. Ugh! I might watch with the covers pulled over my head.

Only one week after his season-ending knee injury, and boy, do the Georgia Bulldogs miss Nick Chubb already. It's time to stop pretending this 2015 football team is remotely good. 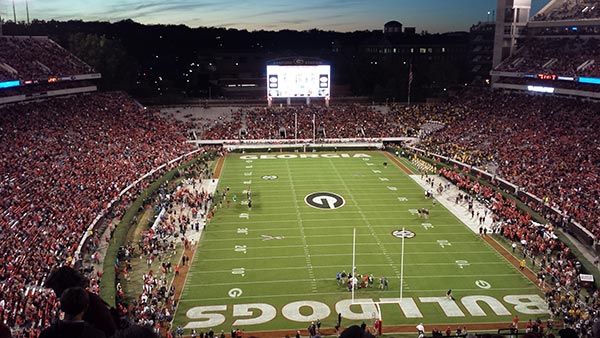 Missouri 6, UGA 9. Nothing but field goals. Quite frankly, UGA didn't really deserve this, as their game-winning kick came only after the officials gifted the team with a truly mystifying pass interference call on a play that Plastic Man couldn't have cought. Greyson Lambert's 3rd-down pass was characteristically awful, and I have to assume that the officials assumed that a pass 5 yards out of bounds was as on-target as he could make it. Maybe they just wanted this terrible game over so we could all get home before dawn.

I probably should have expected this sort of game. UGA was missing Chubb, and Missouri suspended its starting quarterback two weeks ago. Add in the terrible games UGA played back-to-back in the past two weeks against Alabama and Tennessee, and I guess I shouldn't have been surprised that NONE of the season ticket holders beside or in front of me came to the game. You know it's sad when the regular fans don't care to show up for a homecoming night game against the reigning SEC East Champions.

Anyway. I hope the team enjoys this ugly victory. UGA heads to Florida in two weeks, and 9 points won't win anything in Jacksonville.

There's not a lot of good things I can say about this game other than it's over. Not unexpected, but still very disappointing. 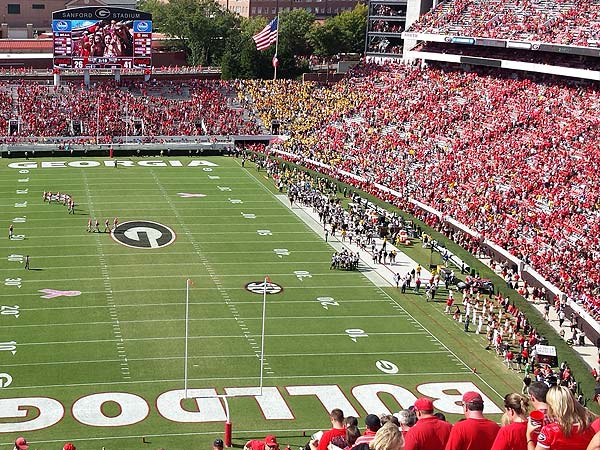 Our injuries on offense caught up with us. So far this season, we have lost the #1 and #2 tailbacks and the #1, #2, and #3 wide receivers on our depth chart from the start of the season, all to knee injuries.

It really didn't help that our defense played true to form, giving up 41 points. So far this season, UGA's defense has surrendered an average of 34 points per game. That is terrible by any standard, but is recipe for disaster in the SEC.

All that proved too much to overcome against undefeated Missouri, which remains undefeated after beating us 41-26 (in their very first trip ever to Athens, GA). I like to say "the exodus has begun" when the crowd starts to leave Sanford Stadium in bulk each week. I suspect after the injuries and continued porous defense, the exodus may have begun on the season.

Congratulations, Coach Bobo, you're no longer the worst coach on the team. That honor currently belongs to the four Strength and Conditioning coaches (Joe Tereshinski, John Thomas, Sherman Armstrong, and Justin Lovett), all now worse than you are. Defensive Coordinator Todd Grantham's mess on defense for 2 straight seasons is putting him in the doghouse, too. But don't think the failure of so many other coaches lets you off the hook, Bobo. Your offense wasn't spectacular this week, either. Missouri seemed to have a good idea how to slow down your offense. I'll say it one more time: if everyone in the stands can predict the next play, so can the coaches on the other teams. You don't have the talent left to bail out your predictable play calls.

No more home games until after we play Florida in November. Here's hoping that UGA can right the ship next week against Vanderbilt in Nashville before our chances at an SEC Championship appearance evaporate completely.