When people complain of Wriphe, it is almost always because they have asked impossible things from it.

Sadly, these shorts were sold out by the time I spotted them on DHGate.com* at the bargain prices of $2.68 (with free shipping!):

*DHGate, for those of you who don't live on the Internet, is an online marketplace like Amazon.com for Chinese manufacturers seeking to unload surplus goods to resellers. This is where sweatshops sell their knockoff shoes after they've fulfilled their orders for Ivanka Trump. For example, compare these shorts with the $14.99 pair you'll find from SuperHeroStuff on Amazon.com.

And while I do want to wear Superman's shorts, I post this pic mainly because of the delightful Engrish catalog text.

CUSTUMES INSIDE TO WEAR
Give you the most suitable underwear, wear make you confidence. I
of you in the other half of the face, not inferior, to give you strength to master everything.

It takes a Superman to understand what that is trying to say.

This year the official UGA bookstore catalog reaches a new level of bizarre.

Hey, if you think it's cute to dress your baby like a football, I guess that's your prerogative. (Better not fumble that ball!) But it sure puts me in mind of something else.

While I'm on the subject of catalogs, do you notice anything odd about the cover to this catalog I received in the mail last week?

No? Maybe it's kind of hard at that resolution. Here, let me help; I've got an eye for this sort of thing. How about this?

Gee, whiz! What happened to that poor dog's toes? Look, I know that Uga VII is dead, so you can't get any new photographs of him. But there isn't exactly a shortage of images of him sitting on grass. Especially since this image is a photoshopped from a picture of... Uga VII sitting on grass.

These images are all the intellectual property of long-time Athens photographer Danny White. According to UGA, Mr. White has been the "official Uga portrait photographer since 1973." And so far as I can tell, he's taken some pretty darn good pictures of some damn good dogs. On first glance, you might think that this is one of them. Seems like someone disagrees with you, though.

Granted, there are a few unsightly wrinkles in Uga's custom Nike jersey. And his right eye is looking a little lazy. And he's got some grass hanging out of his mouth. But none of that explains why someone 'shopped in some li'l doggy toes!

Don't just take my word for it, see for yourself here against the original:

Mouse over/off this swf to control your own seizure.

If you really like this image -- the photoshopped one, not the original -- you can pick up your own copy as a handy refrigerator magnet available at www.ugaredzone.com. (For reasons unexplained, the magnet image is slightly different than either of the other two!) However, be warned: you'd better be prepared to explain to your observant guests why you have a picture of a dog with fake feet.

I know you people all thought I was off my rocker when I protested pink and black football uniforms (back on November 22, 2008). But if you don't make a stand against that sort of thing when it starts, you end up with this sort of fiasco: 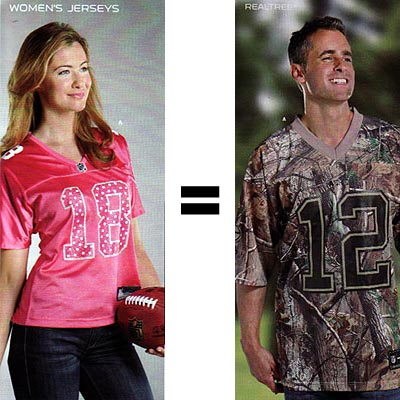 I think we can all agree that this is not what the Founding Fathers had in mind when they drew up the Bill of Rights. What the hell teams are those people supposed to be cheering for?

Those images are on page 24 and 12, respectively, in the September 2010 NFL Shop catalog. The men's Realtree® Camo Replica Jersey costs $99.99. Seriously, they think someone will buy it for a c-note. Maybe it's worth it for people who don't have time to change, rushing from their deer stands to reach the stadium in time for the 1 o'clock kickoff. But I really, really doubt it.

As a UGA alum, I've received these University of Georgia bookstore catalogs for years. This year, however, in the so-called "'08 Playbook," something seemed not quite right. Sure, there was the obligatory image of Mark Richt sporting his official Nike sideline gear, but the rest of the images seemed a little extra... generic. In addition to all of the models being WAY too old to be college kids, the backgrounds were all wrong. I'm very familiar with UGA's campus, and none of the buildings visible are in Athens. But what really spoiled the charade was on page 7:

Clearly, the people at Follett Higher Educational Group who produced and photographed this year's catalog have never even been to Athens. It's one thing to have a guy showcasing polo shirts and swim shorts featuring Uga produced in Martha's Vineyard (catalog numbers 0950807F $68.00 "Piqué Polo" and 0950807G $75.00 "Surfside Swim Trunks" from Vineyard Vines®), it's another altogether to have him pulling a surfboard out of his 2004 Scion xB in the presumed campus setting of glorious landlocked Athens, GA. Even worse, it's a Surftech Roxy soft top surfboard. Roxy is Quicksilver's line for girls. Good choice, brah.

I can't help but wonder how many other college and university bookstore catalogs feature a similar image with different apparel. You know, we can do amazing things with computers these days.