To be able to enjoys one's pat Wriphe is to live twice.

Is it a bird? Is it a plane? No it's a rusty Peugeot 106 with a cape and no insurance carrying two guys dressed up as Superman

The Man of Steel is supposed to fight for truth, justice and the American way - but even he needs car insurance.

Police in Solihull couldn't believe their eyes when they pulled over Superman - or should we say Supermen - after a Krypto-nite out on suspicion of driving with no insurance.

They spotted a vehicle with no back window, but a red cape fluttering through the opening in a (Lois) lane of the M42 last night.

They did a double take as the scene unfolded, and the driver and passenger - both dressed as the Last Son of Krypton - stepped out of the rusty Peugeot 106.

After stopping the pair of Brainiacs near Junction 4, the force tweeted: "Even Superman needs insurance. We don't work for Lex Luthor, but we had to remove Superman's wheels from the road."

One Superman reference per sentence? That's an article that Clark Kent could be proud of.

The Catholic cardinals convene today to select the next pope. Despite the fact that newspapers have been covering this story continuously for the past month, I still read the event as the "PayPal conclave." Welcome to the new Roman Catholic Church, "the safer, easier way to pray!"

At least two houses on my street put up their Christmas decorations last weekend, a full six weeks before Christmas. What's the damn hurry to get to Christmas?

The technician said she shared my opinion, and that in her opinion time passed fast enough without our hurrying it. She then proceeded to to explain that she also hated artificial Christmas trees with "built-in" lights and visiting family that overstays its welcome. It was quite a lively conversation, if a bit one-sided.

At least some other people are perturbed that Christmas seems to be coming earlier each year, I thought to myself. But no sooner had the dentist injected the lidocaine into my jaw before I overheard the following conversation in the hallway outside:

Hygenist: "Do you think that Pike Nurseries on LaVista road is a nice place?"
Voice 2: "Yes. Why do you ask?"
Hygenist: "I think it's time for a Christmas tree."

So now I've decided that decorating for Christmas is a social disease, passed from one person to another, infecting everyone along the way. Obviously, as I'm strictly opposed to the concept of seasonal decoration, I must only be a carrier for the disease, spreading it without showing any symptoms myself.

"I'm Joe Montana, and I spent 16 years playing football......and Shape-Ups™ have improved my strength and posture."

Say it ain't so, Joe. You must have been the only one helped by the shoe, then. Earlier this week, Skechers agreed to pay $50 million in settlement of a class-action lawsuit alleging that the only thing Skechers was shaping up with it's Shape-Ups™ shoes was its wallet.

Shape-Ups™'s other celebrity endorser was Kim Kardashian, and we know what her integrity is worth. Does Joe Montana need cash so badly that he's willing to attach his name to just anything these days? What's next, Joe Montana's propane-powered toothbrushes (the Joe Mouth-tana®: "Brush Your Way to Victory!")? Joe Montana's chemical toilets (the Joe John®: "When You Gotta Go All the Way!")? Joe Montana's homemade deer bait (the Doe Montana®: "Doing It for the Fawns!")?

At least Jimmy Johnson has cornered the market on celebrity football endorsements of herbal erection supplements. No one needs to be exposed to the slogan, "As Big As Montana!"

Michelin has been running animated tire commercials in a heavy rotation during this football season. I assume that they are hoping it will gain their product some traction with the NFL's truck-buying audience. Typically, the commercials roll along at a fun clip, however, the commercial for their Primacy MXM4 comes up a little flat. Read the following transcript of actor John Doman's voice-over narration and see if you can't figure out where I think the commercial runs off the road:

Max and his son made their way homeward bound
when mischievous rain dropped down, down, down.
Safety was threatened by every roguish drip.
They slipped and slid. They couldn't get a grip
Then along came the Michelin Man reminding them the right tire changes everything.
So with Michelin tires rainy days werent so tricky.
Stop up to 29 feet shorter than the leading competitor with the Michelin tire.
Michelin: a better way forward.

Bound is to down as drip is to grip. Then along came the Michelin Man to ruin a good rhyme. If that's what the Michelin Man does to smoothly running cadence, I'm pretty sure I don't want him anywhere near my car.

You can see the whole commercial at advertolog.com. Your mileage may vary.

The Man with the Golden Gums: in the past month, I've spent $1,439 on dental work. That's the most that I've spent on anything in a one-month span since, well, ever. I'm well on my way to being the Six Million Dollar Man, with the entire amount spent entirely on my teeth.

A Chew to a Kill: For the record, those aren't my teeth. My teeth don't look that good. Those are just some x-rays dated May 5, 1951, that I found in my late grandfather's records. They aren't his teeth, either. He was a dentist. I'm sure that if he wasn't already dead, seeing the state of my teeth would kill him.

From page 5 of the June 6, 1882, edition of Atlanta's The Weekly Constitution: 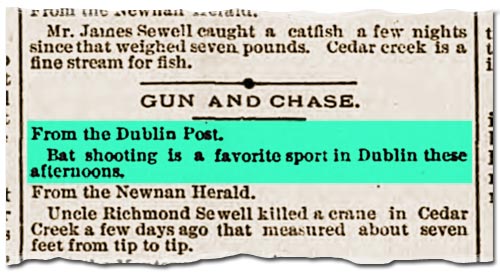 To prove that was no aberration, from page 3 of the September 2, 1885, edition of the Dublin Post: 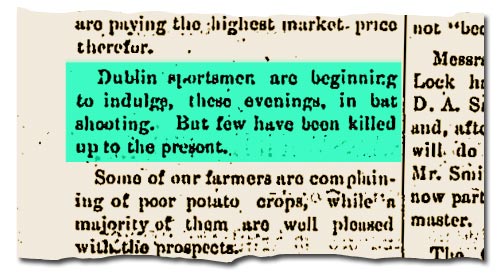 It's official! The citizens of Dublin, Georgia, have always been bat-shoot crazy.