I posted this panel from of Mary Marvel and Hoppy from New Champions of Shazam #2 (a delightful comic) on Twitter yesterday, and it has far, far more retweets than anything I've ever posted in the 11 years I've been on that site. 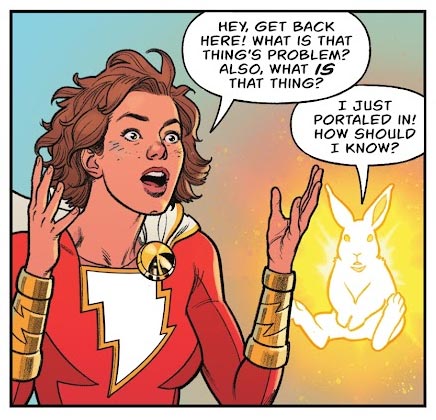 Granted, most of the things I post on Twitter are related to an entirely different and much less well-known comic book character (no, not Batman but Booster Gold), but whatever. If it influences more people to read the comics I like (which in turn encourages DC to make more of the comics I like), I'll call it a win.

I saw exactly two movies in theaters in April. To no one's great surprise, they were

Both films prove the old adage that a hero is only as good as their villain. Marvel's Captain Marvel twists itself in a very unfortunate knot to give her two whole races of badass yet sympathetic aliens to punch. Sadly, the twist doesn't make a lot of sense, but it's far better than the personality-free baddie that DC's Captain Marvel is pitted against. He just wants to fight things, which is fine if all you want from your movie is watching computer generated scenery crumble. Yawn.

Despite that, I can't say that one movie is really better than the other. Captain Marvel is aimed at a more mature crowd and I did enjoy it more, but I suspect kids will enjoy what they've been given in Shazam!. Everyone has to watch their first superhero movie eventually, and Shazam! would be a fine enough place to start. It's not amazing, but it is comparable to the super hero films I had access to as a kid. Condorman is no Casablanca, but I remain a fan.

This is for Trey, who hasn't spoken to me since December 2.

Don't argue with Captain Marvel, Trey. He has the wisdom of Solomon.

When the wizard Shazam turned Billy Batson into the world's mightiest mortal, he created a bit of a problem. See, Billy Batson and Captain Marvel are two different people, at least as far as the world is concerned. Therefore Captain Marvel couldn't just have the same birthday as Billy Batson, because then the good Captain's enemies would be able to discern his secret identity by threatening all 6,000 or so people born on the same day as Captain Marvel. (Back in the Golden Age, super villains had a lot of time on their hands.)

Rather than select a "birth" date completely at random, Captain Marvel chose a date just to cheese off his arch-nemesis, Dr. Sivana. Perhaps behavior like this is the reason that he has an arch-nemesis.

So if you learn just one thing today, perhaps it should be not to go out of your way to remind your adversaries of their failures. That's not a good way to make friends.

This is the 123rd and final post for Wriphe.com/blog in 2009. While it seems like spring was just a few short weeks ago, mere days now remain until 2010 (the year we make contact). The older I get, the faster time seems to move. According to the theory of relativistic time dilation, that means that either I'm slowing down in relation to my surroundings, or more likely the world is spinning faster than before. Since I refuse to believe that I'm not a constant, the world must be increasing in velocity. But I guess that's impossible, isn't it?

Damn you, Superman. In addition to making time seem to move faster, now you've also electro-magnetically erased my hard drives (and given Captain Marvel an erection). Thanks a lot, Man of Asshole.