A laugh can be a very powerful thing. Why, sometimes in Wriphe, it's the only weapon we have.

The 32nd Annual Superman Celebration kicks off at 5PM in Metropolis, Illinois tomorrow. This year the town will finally be unveiling the life-sized, bronze Noel Neill Lois Lane statue to accompany their Superman statue. The statue of "Superman's Girlfriend" has been sculpted by Gary Ernest Smith, the same artist who sculpted the town's Superman statue in 1993. On this timetable, Metropolis will have a Gary Ernest Smith statue of "Superman's Pal" Jimmy Olsen by 2027. Save time and plan your trip now.

This weekend, the BBC ran an item about male escorts in London. Rather amusingly, the article included the story of one client who would,

"...really like to take advantage of Superman. I would arrive at her house in a suit. I'd go along in glasses; underneath my suit is a Superman outfit and we would go through this role-play. She would at one point bring out a green rock on a chain which was kryptonite - that makes Superman begin to lose his power. And of course when Superman loses his power, he's available to be taken advantage of."

Though that client is not named in the article, I think we can easily guess her real identity: 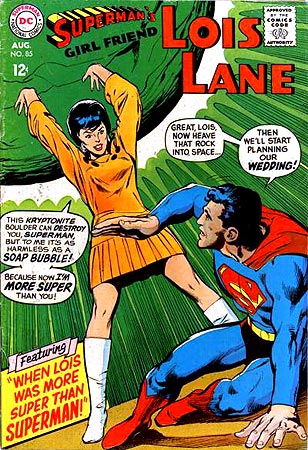 Now I don't really want this to devolve into an argument about sexual politics, but I would have to say that you shouldn't be surprised to see this dynamic actually spring up in the near future of the Superman mythos. I've complained about the editorial direction that DC has taken in the recent past. (I am now calling DC Comics "violence pornography"). And recently, Warner Brothers executives who were "disappointed" in the weak gains of Superman Returns have promised "exploring the evil side to characters" in the vein of the much more financially successful The Dark Knight. (Which sadly means that they don't know what they did wrong with Superman Returns when the obvious answer is as close as Christopher Reeve's portrayal of a superior ethical being in Superman: The Movie that the studio tried so hard to [r]ape without really understanding.)

So when Superman's Girlfriend Lois Lane, romantic foil of a light comic fantasy, is replaced by Superman's Stalker Lois Lane, a darkly twisted "realistic" woman driven by her lust for a true Man of Steel, in an upcoming movie, expect me to say, "I told you so." Because you know I will.

You may have noticed that in that last post (Feb. 20), Superman was hiding behind a rock on the Action Comics and Superman covers. You may have asked yourself why the Man of Steel was spying on Bizarro's love life. Turns out that's just the way Superman rolls.

And it's probably justified. It seems that Superman's supporting cast can't go anywhere without getting into some improbable fix that only an invulnerable interplanetary alien with the powers of flight, speed, and strength (among others) can extricate them from. Superman's Pal Jimmy Olsen got into so much trouble, Superman had to give him a beeper.

Lois wears bridal fashions like I wear Batman t-shirts. She appears in a bridal gown on 9 different covers (twice on issue 37 and four times on issue 86!) of her 137 issue run in Superman's Girlfriend Lois Lane. Make that 10 covers, if you count her red cloak worn during her marriage to Satan -- yes, Satan -- on the cover of issue 103.

Meanwhile, Jimmy appears dressed as Superman on only 6 covers of the 163 issue run of Superman's Pal Jimmy Olsen. Seven covers, if you count Jimmy's remote control usage of a Superman robot on the cover of issue 9. In a rare guest appearance, Lois Lane manages to wear her fraying wedding gown when she weds Jimmy on the cover of Superman's Pal Jimmy Olsen issue 21, but Jimmy misses the golden opportunity and lamely wears a tux.

Lois, your boyfriend, Superman, just gave you chocolates and a card. Superman, a man who can generate enough pressure to fabricate diamonds from raw coal, use x-ray vision to find undiscovered gold deposits, and swim to the ocean's greatest depths to recover natural pearls, gives his girlfriend chocolates and a card. Worse yet, Superman, a man whose brain works faster than a computer, who has matched wits and won against Brainiac, the universe's smartest supervillain, who has saved countless lives through the force of his own will alone, couldn't even be bothered to take the time to think of a better inscription for the card than "Be my valentine from Superman."

That expression on Lois' face isn't happiness. And there's a reason that Superman is rushing out that window. He may be super, but he's still just a man.

The best part of all of this? For Valentine's Day, Superman gave Lois the Schaff's.

In honor of Action Comics #1's June 1938 cover date, I'm declaring June "Superman Month"! (No, I don't need a better reason than that. It's my blog, dammit.)

Don't miss the annual Superman Celebration in Metropolis, Illinois June 7-10. Even though Erica Durance cancelled, Noel Neil is still scheduled to be there. Maybe you can have too many Loises in the same place at the same time.