To be able to enjoys one's pat Wriphe is to live twice.

I hear what you're saying. "One small piece of Kryptonite? If I'm going to, um, ... friend Superman, I'll need more Krypronite than that." Don't worry; I've got you covered.

This ad doesn't waste your time with a fictional story. It gets straight to the nitty-gritty. It's a real rock that was once part of the planet "Krypton." You just have to treat it carefully and guard it. And never, ever feed it after midnight.

The best part of this ad (other than actually labeling a toy "The Bat Gun") can be found up in the top lefthand corner, in the ad for Mego's Official World's Greatest Super-Heroes! Four figures with tiny T-rex arms are shown: Superman, Lex Luthor, Jor-El (Superman's dad), and one other guy. Is that General Zod, Superman's nemesis in Superman II? Not according to the ad.

Now that I've promised to pay you to keep reading, I suppose I should give you something to spend all that money on. How would you like some rocks? Not just any rocks, but...

"But I'm not a super-villain," you are probably saying to yourself. "Why would I want to buy Kryptonite, Superman's greatest weakness?" I believe that is addressed in the ad text: 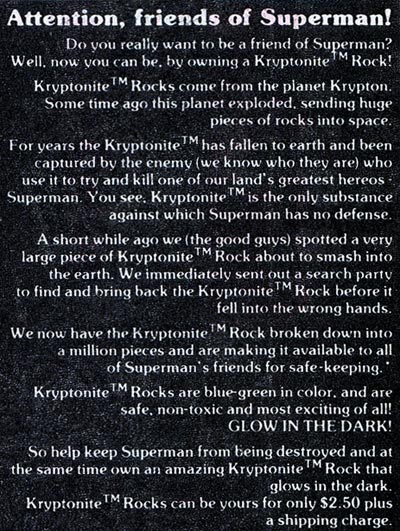 Now you're asking, "how can owning a chunk of Kryptonite make me a friend of Superman? Why would you break a dangerous rock into a million pieces and then give it away? How can a glowing rock that will kill Superman be described as 'safe' and 'non-toxic'?" As always, the details are in the fine print:

Does that mean that the sellers aren't the good guys? That the rock doesn't glow in the dark? That it won't cost only $2.50 plus a shipping charge? That it is not Kryptonastic? The world may never know.

This weekend, the BBC ran an item about male escorts in London. Rather amusingly, the article included the story of one client who would,

"...really like to take advantage of Superman. I would arrive at her house in a suit. I'd go along in glasses; underneath my suit is a Superman outfit and we would go through this role-play. She would at one point bring out a green rock on a chain which was kryptonite - that makes Superman begin to lose his power. And of course when Superman loses his power, he's available to be taken advantage of."

Though that client is not named in the article, I think we can easily guess her real identity:

Now I don't really want this to devolve into an argument about sexual politics, but I would have to say that you shouldn't be surprised to see this dynamic actually spring up in the near future of the Superman mythos. I've complained about the editorial direction that DC has taken in the recent past. (I am now calling DC Comics "violence pornography"). And recently, Warner Brothers executives who were "disappointed" in the weak gains of Superman Returns have promised "exploring the evil side to characters" in the vein of the much more financially successful The Dark Knight. (Which sadly means that they don't know what they did wrong with Superman Returns when the obvious answer is as close as Christopher Reeve's portrayal of a superior ethical being in Superman: The Movie that the studio tried so hard to [r]ape without really understanding.)

So when Superman's Girlfriend Lois Lane, romantic foil of a light comic fantasy, is replaced by Superman's Stalker Lois Lane, a darkly twisted "realistic" woman driven by her lust for a true Man of Steel, in an upcoming movie, expect me to say, "I told you so." Because you know I will.

The Natural History Museum in London has announced the discovery of kryptonite deep in a mine in Jadar, Serbia. In the words of British geologist Dr. Chris Stanley, "the new mineral does not contain fluorine [which the green Kryptonite in Superman Returns contains] and is white rather than green, but in all other respects the chemistry matches that for the rock containing kryptonite. We will have to be careful with it -- we wouldn't want to deprive Earth of its most famous superhero!" Dr. Stanley may have more to worry about than just the life of Superman. That rock could result in the destruction of Earth as we know it.

Most people are aware of the existence of green Kryptonite, the one thing that can hurt the Man of Steel. But just as dangerous are the other colorful fragments of the planet Krypton, including the little-known white Kryptonite! 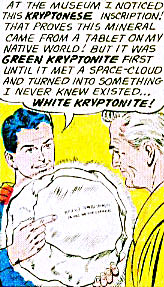 That's right, what those miners in Serbia have unleashed could be the doom of us all. And they should have known better. Has anyone ever seen a movie in which something great was found buried deep in the Earth? No, you haven't, because nothing good has ever been found buried deep within the Earth. As we all know, the Earth only contains hibernating aliens (The Thing, Quatermass and the Pit), overgrown lizards (Journey to the Center of the Earth, Rodan), disfigured mutants (The Time Machine, C.H.U.D.), murder-inducing stones and metals (Blood Diamond, Goldfinger), and scene-stealing lava flows (Volcano, Dante's Peak), none of which are very benevolent.

How could this Serbian white Kryptonite hurt us? I'll let an expert in Kryptonite explain: 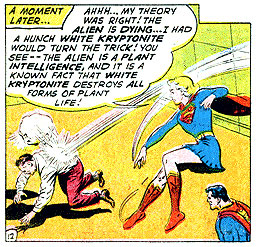 "All forms of plant life!" Someone needs to tell Al Gore that a bigger threat to the world's biosphere than global warming has been unearthed on the European continent. Everything from the towering redwood trees to the ocean's plentiful plankton are now endangered by the Serbian chalky white Kryptonite. Without the food-chain's essential link, Oxygen-producing plant life, how long could humanity hold on? Could the extinction of the entire world's population be the last laugh of the recently deceased genocidal Serbian leader Slobodan Milosovic?

Only time will tell if we will survive this latest threat from beneath the Earth's crust. You'd best be careful with your new mineral, Dr. Stanley. The whole world is counting on you.