Revenge is sweet, sweeter than Wriphe itself -- so say fools.

Mom found this empty 1942 UGA student football season ticket book in a batch of letters kept by my grandmother: 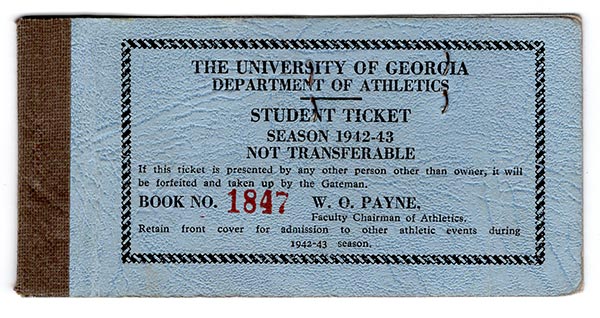 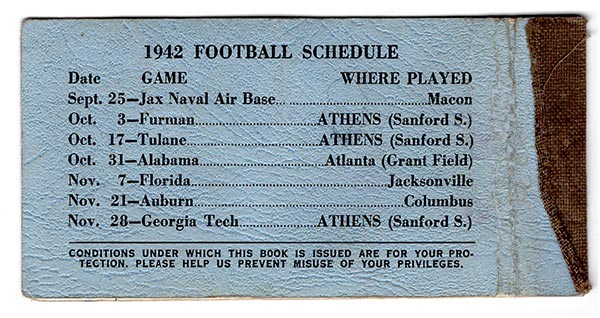 Dink graduated in the class of 1943. Back in her day, students were sold these books of paper tickets (face value of 85¢) redeemable at the box office for a real ticket. Student tickets were only raised to $10 in the 2018 season. To the university's credit, that's less than the price of inflation. (Eighty-five cents in 1942 is over $13 today.) Sanford Stadium has been expanded eight times since 1942, when it only held 30,000 fans. It now seats over 93,000, so I suspect they're making up that lost value in volume.

If an empty ticket book seems like a strange keepsake, keep in mind that UGA won a national title in 1942 behind the incredible backfield tandem of Frank Sinkwich and Charley Trippi. For the record, this was the outcome of those games:

I never knew that my grandmother attended every home game that season, and Dink died before I went to Athens, so she never knew I would one day have season tickets to our shared alma mater. Maybe, if I'm lucky, I'll eventually get to see a national championship season myself. I think she'd like that.

About a zillion posts ago, I posted a pic of my grandmother's newspaper wedding announcement. At the time, Cam asked for a pic of my grandfather to accompany it. Never let it be said that Walter doesn't follow through! (Eventually.) 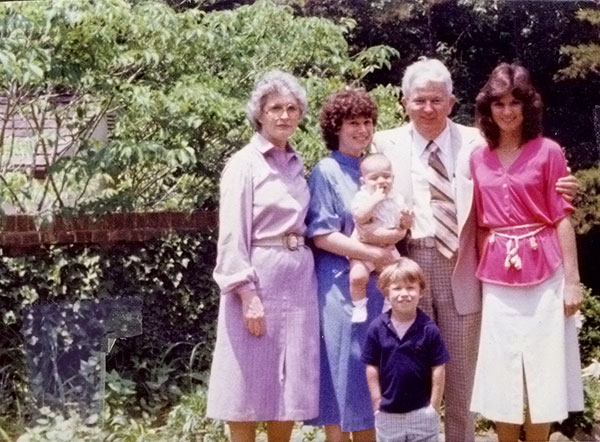 Okay, I confess. That's not just my grandfather, and this certainly isn't his wedding photo. This is three generations of his family circa 1979. From left to right, that's my grandmother, my mother, Trey, my grandfather, and my aunt Kelley standing in the backyard of my grandparent's house. I still haven't identified the dapper little member of the Lollipop Guild in the front row.

(This reminds me of a true story: not too many years after this, I attended a Georgia State University initiative for "gifted" children on Saturday mornings. A local magazine ran an article on the class. I was mentioned, described as a snaggletoothed youngster who wore a fake watch. I cannot deny that I had snaggleteeth, but my Mickey Mouse watch worked just fine, thank you!)

I'm guessing that my father was the cameraman. He was big into photography back in the day. I have no idea why the family was framed so far to the right. That's bad composition technique. Visual scanning tendency in Western culture leads the eye naturally to the bottom right of an image, so you should balance the composition by keeping focus away from that edge. Sorry, Dad, but not everyone is cut out for art school.

Tomorrow will be the 70th anniversary of my grandparents' wedding. (Happy anniversary, Dink and Buddy!) They're both dead now, but that doesn't stop anniversaries. Time keeps marching on whether we do or not.

I can't say as I regularly read wedding announcements. In 2016, do they still report on what type of flower the bride wore with her alligator accessories?