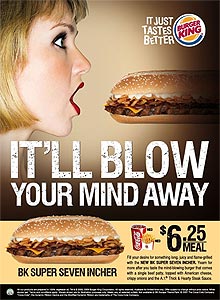 While I'm sure that the King is very proud to have a Super Seven Incher (as he should be: the average American male's "sandwich" is more aptly named an Average Five-And-A-Half Incher), I'm not so sure that this is the best way to sell a sandwich. Or anything else. Assuming half of the population wants to put something like that in their mouth, it's a pretty safe bet that the other half will go out of their way to avoid it. So right off the bat, Burger King is cutting its potential advertising audience in half unless they are hanging these promotions up in prisons.

On the plus side, as far as names go, that's waaay better than The King's Weiner.

Seriously, Burger King, you're starting to freak me out. When I think of sex, I don't want to think of flame-broiled meat. I don't think that coitus should have the lingering musty smell of old Whopper. And I don't think I want to put your meat anywhere near my mouth. Keep this up, and I just might have to become a vegetarian so that your stiff french fires and sultry milk shakes won't be molesting me in my dreams. (If only cucumbers didn't look so much like large penises. <shudder>)

Burger King thinks I'm stupid. They're trying to sell me miniature hamburgers that are smaller than the Whopper, Jr. However, these smaller burgers are also half-again more expensive than a Whopper, Jr. "But that's because we're selling them in 2-packs," Burger King contends. Seriously, that sort of negates the initial selling-point that they're smaller portions, doesn't it? I know that tiny hamburgers are the latest, greatest craze in the American hospitality industry, but there's a right way and a wrong way to do everything. Charging me more for less is definitely the wrong way.

Desperate to convince me that this is a good idea, Burger King has borrowed a tried-and-true beer advertising ideology, namely boobs. But they've screwed that up, too. Men in their commercials holding an A-cup pair of the "cute" smaller burgers are swarmed with uncommonly attractive coeds who find the burgers -- and by extension, the dork holding their small buns -- adorable. I don't know about Burger King himself, but for me the "cute" response is reserved for things that I want to nurture, like puppies and children, not things that I want to consume, like hamburgers and Hooters waitresses.

Before you call me an overreacting prude, note that the carefully market-tested name of these burgers, "Burger Shots," is a slang term for a photograph of the external female sexual organs. It's also the name of a restaurant chain in the nihilistically perverse Grand Theft Auto universe which is itself based on Burger King. Coincidence? Before you answer, please note that the signature burger at the fictional Burger Shot chain is called a Bleeder. (Think about it.) It's a bit frightening to think of what's coming next from the dirty minds at BK marketing. Will drink refills be renamed "Sloppy Seconds"? Will kids' meals be branded "Fun Bags"? (I kid, but bk.com already advertises "BK Kids Meals Now with BK Burger Shots™." Think about THAT.)

Frankly, Burger King, I'm surprised to discover that My Way is quite so lecherous. I think It's pretty clear that at the age of 55, Burger King has become a dirty old man.

You know, being the Riddler can't be all bad. Sure, he's got a psychopathic need for attention that always causes him to get caught, but the guy otherwise lives a pretty good life: he's clever, he's dapper (not so much in the green-footed jammies he's wearing above, but his suit and question mark cane are really quite stylish), and he has a lot of fun. The guy laughs a lot! He gets a lot of healthy exercise, so he's in pretty good shape. And he gets to spend a lot of money on creature comforts (when he's not in Arkham Asylum, which is frequently the case). Come to think of it, he lives pretty good in Arkham, too, as one of the less violent offenders in the joint he must get the run of the place.

Look at him up there, stretched out on a beach waiting for Superman to bring him to justice. That's the life. Pretty flowers, good music, tranquil waves, Pat the Bunny... maybe crime does pay.

What, exactly, is going on in the picture above? I wonder, just who is Batman's "pal"? Is Batman coming to Superman's aid or the Riddler's? Or for that matter, maybe the Dark Knight is rowing in to help that poor roller skating android who seems to have been caught completely unawares by Superman's left hook. Clearly, that is not Metallo, The Man with the Kryptonie Heart, out there. That ferrous fellow doesn't stand a chance against the Man of Steel. It doesn't even know any better than to wear roller skates on a sandy beach. Silly robot, roller skates are for kids.

For the record, the 10 things beginning with the letter "R" are rabbit, radio, robot, rock, rocking chair, roller skates, rope, roses, and rowboat. Hmmm.. I'm missing one... what could it be?

I'm sitting here, working on preparing eBay listings of Happy Meal boxes and toys that my mother has collected from various restaurants over the past 30 years. I'm also listening to BBC News on NPR cover the growing crisis with the Italian presidency. These two separate and completely different activities have led to this:

Perhaps Sir Shakes-A-Lot should be the new president of Italy, the country whose Supreme Court recently declared that it's ok to rape women if they aren't virgins. He may be spastic, but at least he understands the Chivalric Code.