This is your Wriphe, and it's ending one moment at a time.

Neither Mom nor I watch a lot of serialized television. I prefer stand-alone movies. She prefers going to bed with a mystery novel. We've found an overlapping sweet spot of entertainment that we both enjoy in the Hallmark Mysteries and Movies channel.

Most of the following are what used to be called "made for television movies," if that distinction has any meaning anymore in the modern landscape of streaming media. Most of them are based on series of books.

64. (1503.) Murder, She Baked: A Plum Pudding Mystery (2015)
We started by watching the misadventures of professional baker and amateur sleuth Hannah (Alison Sweeney). Mom had read and loved the books. The movies are cute, if heavier on the romance than the mysteries. Alas, Sweeney has moved on to other series and will bake no more murders.

85. (1524.) Darrow & Darrow (2017)
86. (1525.) Darrow & Darrow 2 (2018)
87. (1526.) Darrow & Darrow: Body of Evidence (2018)
Unquestionably my favorite of the Hallmark mystery bunch. The younger titular Darrow is Kimberly Williams-Paisley, who I had something of a crush on in the mid 90s in her pre-According to Jim appearances in Steve Martin's Father of the Bride remakes and the Relativity television series I watched with my girlfriend at the time. I could still watch her for hours, and I have.

So that's what my Mom and I do together — even when it isn't Mother's Day.

Mother's Day means more Renaissance Festival. We went last year and had a good time. The weather was nice, so we went again this year. It's a tradition now. I suspect Christmas started much the same way.

Not much has changed. Just the important things.

You could still see the imprint of the word "Coke" underneath the new vinyl letters. Was the festival no longer serving Coca-Cola products? What did they drink now? Pepsi? That's not the Renaissance. That's hell!

I shouldn't have worried. They still sell Coke. It is the Georgia Renaissance Festival, after all. What else are they going to sell? Dasani?

Maybe we'll find out next year. We have a tradition to keep now.

I spent my Mother's Day people watching with Mom at the Georgia Renaissance Festival today. Although it was her suggestion to go, I think Mom was initially lukewarm on the idea. She warmed up after we got to the park and she started people watching. There sure are a lot of people who enjoy dressing in the fashions of 16th-century Europe. Lots of fellows wore codpieces, and there were more moms than I would have guessed who enjoy the opportunity to push a stroller while wearing hide corsets and leather bras. 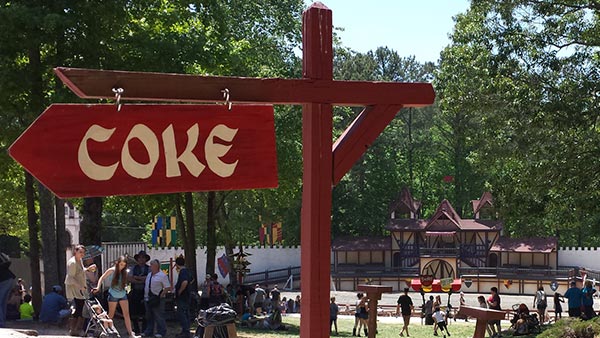 Mom spent most of the day browsing through vendors' tents filled with bronze water fountains, incense, parasols, swords, and jewelry. However, more than anything else, I think what Mom was most excited about was the pointed plastic ears that so many children and cosplayers were wearing. The quality of the pointed Elf ears available at the festival were a cut above the cheap Mr. Spock ears I've seen on Star Trek fans in years past. If I didn't know better, I would have thought that some of them were real Vulcans.

Mom and I watched a joust, a singing duo, and a fire-juggling balancing act, but the real highlight of the day was the birds of prey demonstration by Steve Hoddy of EarthQuest. According to their website, Hoddy's organization will be making an appearance at the Coweta County Fair in September. Mom has already put that on her event calendar.

Despite Mom's interest in the raptor show, I think she spent more time watching the super-fit gentleman charged with pushing the dragon swing. There seemed to be a steady line of women interested in taking a ride (for their children's sake, of course). Mom and I giggled like school children when two particularly large women paid for a ride. Poor guy, although I guess he didn't build all those muscles by pushing kids around.

By the way, I was tickled pink to see that the festival still offers "The King's Wiener," a foot-long hot dog I first saw at the festival 7 years ago. I still didn't eat one, mind you. I just like to look.

Other than that one story about ice cap-melting greenhouse gasses, what do those stories even have to do with the weather? Maybe it's time to rename the station "The Whatever Channel."