When Wriphe gives you lemons, you probably just found lemons.

I helped a friend do some work around his house last week, and I spotted this, the tumbler he uses to hold his 6-year-old daughter's juice. 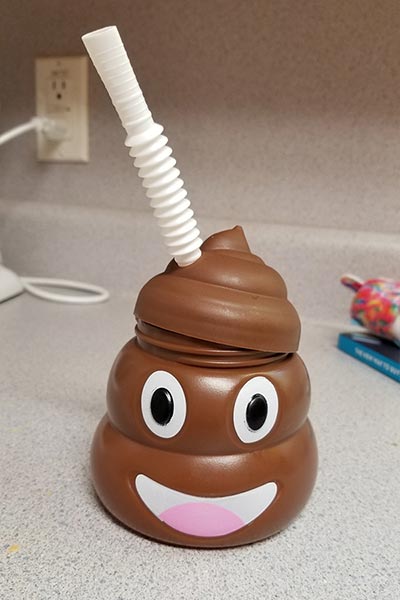 Normally, when I see this sort of thing, I'm left wondering what the owner could be thinking. However, I've known Randy long enough to know that this isn't a thoughtless accident. He probably gets a kick out of watching his little girl suck shit.

I suppose if you have a child, you get to decide what to do with it. Kids are just pets that can talk!

Bill Ingram Posted May. 14, 2019 at 11:59:31 PM
You would know about pets that cannot talk. Either you kick them when someone other’s pets are underfoot, or you accept your own dogs no matter how often they are “underfoot”. And they were always underfoot. How do you decide which dogs you viciously kick, and which ones, of your own, you grace with their omnipresent interference in the walking paths of a normal home? I liked your dogs. I did not care for their unquestioned acceptance as a necessary obstructive presence in a home. You did not care for Chewey. Ergo, your kicks and yelling, and your obvious celebration at his demise. I await your lame defense, and your mother’s defensive justification of your existence.
But, then, you eventually kick and yell at everyone whom you fear, FEAR, is invading your space. Ask your brother.

I really don't know what I did to you to earn all this animosity, Bill. I assume that you resent my presence on this planet because you imagine that I did something to interfere with your relationship with my mother. (It couldn't possibly have anything to do with her discovering your own delightful personality, could it?) Whatever the case, nothing you can say to me can hurt more than my brother behaving as though I don't exist anymore. How about you follow his example? I promise to act like it bothers me.

Randy Posted May. 16, 2019 at 10:28:33 PM
Not sure I like the set of tag words you got there. I feel personally hurt by this and I think I will spend too much of my time and energy commenting on your posts and such until I look like a wacko that your mom is lucky to have out of her life.

We have some new across-the-street neighbors. Yesterday as I was walking the dogs, their toddler ignored her father's shouts and began stumbling her way across the lawn to reach my poodles. When daddy finally caught up to his little girl -- right by the street, I might add -- I jokingly asked if he needed to borrow one of my leashes. He didn't seem to think that was too funny. Some people can't take a joke.

While we're on the subject, I should mention that I used to think those child leashes were a modern invention. Maybe this is because they are surprisingly controversial. If you want to pick an argument in a room full of mothers, simply start a discussion about bottle feeding, vaccinations, or toddler leashes. Be sure to have an exit strategy planned first, because it's going to get ugly.

But watching Picnic earlier this month belied that belief. One brief shot lampoons the weary mother with two toddlers straining to run in opposite directions. The children are restrained only by, you guessed it, toddler leashes. That film was made in 1955, and the sight gag must have been already an established trope for it to be included as a bit of comic relief. After all, the film's setting is small-town Kansas, hardly the bleeding edge of society.

So just how long have people been tying rope to their children to keep them in tow? A quick Google search tells me that at least as early as the 18th century, children's fashion occasionally included "leading strings," or long cloth straps attached to the shoulders which served a similar purpose as today's toddler leash. Does that mean that a young George Washington was once led around by his father like a standard poodle? I cannot tell a lie: I like to think so.