Talent is luck. The important thing in Wriphe is courage.

Watchmen, published in 1986, is arguably the greatest comic book ever made. At its heart is a hero so driven by the horrible inevitability of global nuclear war that he willingly becomes history's worst villain in order to force the nations of the world to unite against him. It's brilliant storytelling.

As recent events have proven, it's also total bullshit.

It's become obvious to everyone in the past four months of the ever-escalating COVID-19 pandemic that there is a portion of the human population that is too selfish to give a shit about their own well-being even when a crisis is upon us and the path leading to solution has been well marked.

Most of this group refuses to take action merely because it would be inconvenient to do so. Others would rather see civilization crumble than face any potential loss of face or influence. Sadly, too many of these are the ones we've allowed to become our leaders as we have increasingly mistaken stubbornness for wisdom.

See, the world doesn't need another villain. It's already got plenty. 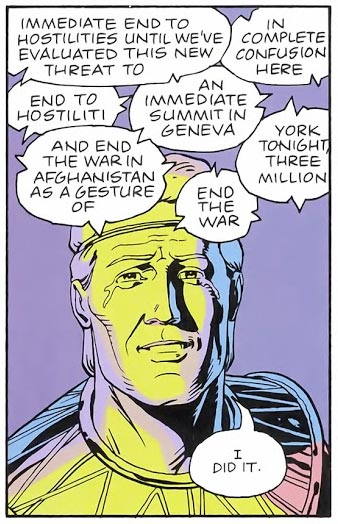 If you weren't reading this blog, you may not have heard that Batman is dead. Somehow, American media hasn't really covered this story.

Granted, the "death" of a comic book character is hardly "hard" news. However, when Captain America was capped in 2007, his comic book sold amazingly well, and America was abuzz about the inherent symbolism of his death. Batman's death wasn't even the second-best selling comic of the month, and no one seemed to care.

This apathy is clearly not a problem of the public not recognizing the character or being unsympathetic to comic book properties: The Dark Knight was the highest grossing film of 2008, and you can't turn around without bumping into a discussion about Watchmen, which has been seen by at least 5 million people in the past 2 weeks.

I suspect, more than anything else, that this a problem with the quality of the stories that DC has been releasing recently, though I have to admit that blame must be shared with DC's marketing department and terrible timing. One of the comics that outsold the death of Batman (3 to 1) is an issue of Amazing Spider-Man that capitalizes on a current marketing craze by featuring a guest appearance by Barack Obama. (Worthless comics marketed as collectibles? Who would buy that?) But the other, Dark Avengers #1, is essentially a reworking of a Thunderbolts storyline that was very popular a decade ago. That means that the comics-buying public, the group most likely to buy into any hype regarding the death of Batman, believes that a rehash of a 10-year old story is more entertaining than the stories that DC is telling.

DC, if your audience isn't buying, I recommend that you take a good look at the products that you're selling.

I don't consider myself a deep thinker. (Unless, of course, I'm trying to figure whether the immorally apathetic Comedian, the unyielding vigilante Rorschach, or the mad machinations of Ozymandius represents a greater threat to the crumbling, stagnant civilization in Watchmen.) And while I'm far too shallow for frequent introspection, I do constantly marvel at modern technology. How often do you stop and think about how your life has changed since the onslaught of the World Wide Web? Can you even remember a time when you had to buy a magazine to see naked girls? Thank you, Al Gore, for inventing the internet!