Wriphe is a great bundle of little things.

I admit it: I was wrong.

I finally did the thing I said I wasn't going to do and watched Man of Steel (2013). I can say emphatically that it is a great movie with a stirring, swiftly moving plot, realistic characters, and bright, engaging visuals combine for a movie experience second to none.

I realize now that I've been mistaken in criticizing producer Christopher Nolan in the past for making movies that forsake the larger-than-life, heroic elements of superheroes to focus instead on their foibles. In the 21st century, we already have enough heroes; what we need is more mindless entertainment. The more rampant destruction and murder appearing on the screen, the better.

I've also come around to appreciate that sweet new costume. Bright colors would only distract from the well-crafted illusion that this story of alien invasions takes place in the real world. Besides, using anything other than custom-made plastic suit printed in interlocking rings instead of real fabrics would be a waste of high definition technology.

So shame on me for resisting everybody's favorite film for all these years. Maybe I don't really know what I like anymore.

I've now seen Superman Returns, and it sucks, just like I expected it would. Though, to be fair, I expect most things to suck, so this indicates no special prediction on my part. However, most of my pre-viewing complaints were proven completely accurate.

Sure, Routh does a fine job of impersonating Christopher Reeve, and Spacey makes a passable Gene Hackman. Too bad they were playing Superman and Lex Luthor instead. The rest of the cast seemed almost carelessly chosen. Bosworth's Lois is way too young and entirely too emotional. (Note to all future actresses who want to portray Lois: see Jennifer Jason Leigh in The Hudsucker Proxy and emulate that. THAT's Lois Lane.) Langella's Perry White and Marsden's Richard White both lacked substance, but it could have just been poor scripting. Everything else was. And that's what tanked this baby.

The producers of the movie would have done well to follow the old entertainment maxim, "give 'em what they want." Superman is nearly 70 years old and has profitably appeared on popular radio, television, and movie programs for decades. Why now did they decide to modify the costume and give him a child? They didn't update Jimmy (other than giving him a digital camera) or Perry, Smallville or Ma Kent. No, the one thing that they shouldn't have changed is the one thing that they messed up. Here's a hint for the next film, Singer: if it ain't broke, keep your damn hands off it.

Stop reading now if you don't want spoilers to the movie.

The universal gripe with the movie is Lois' child. Just as every real human being can tell that Clark Kent and Superman are the same person, every real audience goer can tell that the child is Clark's long before the "big reveal" when the child KILLS SOMEONE. The mere presence of this child completely ruins the story of the film, presenting an insurmountable obstacle to the necessary suspension of disbelief required to enjoy any fictional film, especially one with flying men.

First of all, I refuse to believe that Clark Kent would leave the planet Earth after having unprotected sex with Lois Lane before confirming that she was not pregnant. I don't know one American male who has had unprotected sex who hasn't at least briefly worried about the possibility of unwanted pregnancy. (It's the American Protestant upbringing, I suspect.) Even though he's an alien, I don't think Superman is that different from other Americans in that respect. I know that church-going Pa Kent gave young Clark the Birds-and-the-Bees story at least once, so I'm pretty sure that Clark knew the consequences of a wild night out with Little Superman in the driver's seat. 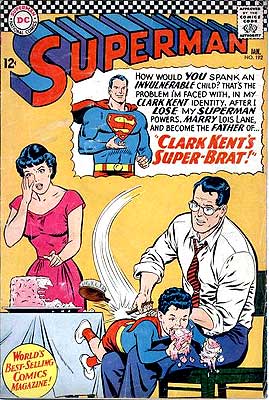 Since this film is built on the stories of Superman and Superman II, it is perfectly reasonable to suppose that Superman could have knocked up Lois during the hours when he was powerless during Superman II. And under post-Crisis on Infinite Earths continuity, Superman didn't gain his powers until adolescence, saving Lois from any mortal wounds while carrying the super-sired child. This certainly bypasses the potential difficulty of super-sperm as related in Larry Niven's infamous essay. But I still say the Superman that I was weaned on would have checked in on the action in Lois' womb once his powers returned before departing for the remains of Krypton. It would have been the right thing to do. He would simultaneously be easing his own guilty mind while confirming his beloved Lois' state of health before abandoning her on his search for his roots. Anything else would have been cowardly, an adjective that should never be applied to Superman.

Secondly, during the course of the story, Superboy reveals that he has super-powers by killing a man with a piano. Though this action is in defense of his mother, the child should never have had to perform this action. One of the moral tenets that has served Superman well over the years has been the belief in the sacred right to life. Though Superman has had to deal with many crooks, thugs, miscreants, gangsters, criminals, and murderers, he has never killed any of them, thanks to the rigid moral upbringing that he received from his parents. He would be horrified if his progeny used his powers in such a way as to result in someone's death. The manslaughter of the criminal cannot be justified as self-defense for the child or the mother because if the child does have super-human power such as Superman, he had the means to prevent the death though other applications of super-strength. The child's choice to use strength kill was inevitably a failure by the parents, since the child could never be expected to make such a rational use of his power with his limited understanding of the world. He is, after all, a child. Lois' refusal to admit that the child was Superman's and Superman's refusal to live up to his responsibility resulted in the child receiving poor moral guidance for such inevitable situations. (Any child of Lois Lane is going to end up in life-threatening danger. It's in the genes.)

Worse yet, during the movie, Clark Kent is shown in a bar drinking a Budweiser with Jimmy Olsen. Ignoring the question of whether bow-tied Jimmy Olsen is old enough to drink beer, what is this scene supposed to show other than a promotion of an Anheuser-Busch product? Superman doesn't drink beer! Though he's presumably immune to the effects of alcohol (as well as any additional poisons), Clark would never drink booze, especially in front of his impressionable pal, Jimmy.

Superman is paranoid that he might lose control of his powers and harm someone. The theme of irresponsible use of power has been part of Superman's mythos since his radio days. There's a television episode ("Superman in Exile") where he chastises scientists for not knowing what powers they are unleashing from the atom. The Superman I grew up with wouldn't even risk imbibing and damaging his own judgment. He also wouldn't encourage Jimmy to drink by setting a bad example himself. Though it may be acceptable for Jimmy to kick one back and relax after work, Clark shouldn't and wouldn't encourage him. However, if Jimmy wanted to drink chocolate milk, that's a Quik Bunny of a different color. Superman has pitched everything from Kellogg's Frosted Flakes to Radio Shack Computers to American Express Credit Cards. But so far as I'm aware, he's never pitched for anything quite so dangerous or controversial as alcohol before. What's next? Superman handguns? After this movie, it ought to be condoms. Tsk, tsk, Warner Brothers, for handling a product placement in such an irresponsible manner.

It's clear that Singer and company simply don't understand what makes Superman super. More accurately, they probably don't care, preferring to make their fame and fortune by putting their stamp on an American icon. Singer and pals decided to simply tweak a formula established by a previous director in order to jumpstart a cash cow franchise. Nevermind that the 70s movies have a few plot problems and Christopher Reeve is dead. Nevermind that Superman is among the most well-known and cherished of American icons. They figured that they would just push on, changing all of the wrong things, and audiences would love it. It's exactly that sort of arrogance that caused the film to lose $70 million on its domestic release. According to Box Office Mojo, the film cost an estimated $270 million to make. If accurate, that makes it among the most expensive movies in history. But a flop by any other name....

America knows what it likes, and it doesn't much like Superman Returns. And I agree with them.