Filed in the "Better Never Than Late" category, my aunt who said she wasn't giving Christmas presents this year just gave me a pair of bedroom slippers. I suppose technically, this was a re-gift, because she had bought the slippers for her husband who couldn't wear them. (His feet are too wide.) Since she bought them on "Christmas Clearance" for $4.75, she thought I might get more use out of them than the trash can. That remains to be seen.

See, these aren't just any slippers, but Conair™ Massaging Slippers. That title is a little misleading. They don't massage so much as they vibrate. Anyone who confuses a vibration with a massage has clearly not had a real massage. It makes you wonder what those people call "turbulence."

Each of these slippers requires a single AAA battery to begin their "massage" function. The battery compartment is inside the sole of the slipper, which has the unfortunate effect of making wearing the slippers feel like you are balancing on a narrow remote control. Despite what the packaging says, "comfortable" and "relaxing" are not words I would use to describe the experience.

Conair™, the same company that made my hairdryer, seems to have several misunderstandings about what house slippers should be. You know something isn't quite right when slippers come with a 6-page instruction booklet. Included in the "Important Safety Instructions" for this delightful pair of shoes:

The "don't ever get them wet" warning appears in one variant or another 6 times in the Warnings and Cautions. I guess wearing these things fresh out of the shower is a no-no then, too. I'm beginning to think that the "faux suede" is made of the pelt of mogwai from Gremlins.

Will I wear these slippers? I don't know. They aren't very comfortable, and I suspect that the instruction booklet would frown on any attempt to wear them with socks or while drowsy, like, you know, shortly before bedtime. Other than that, they are a great gift. Thanks, Kelley!

My mother thinks I have a foot fetish. I don't. At least I wouldn't call it a fetish. But I do notice what people (especially women) are wearing on their feet. Some things are acceptable, and some things are not. Flip flops float to the top of the "not" category. Unfortunately, Old Navy is determined to keep me a single man for the rest of my life.

When I see that commercial, the thing that I notice is that the only person in it who is actually wearing the flip flops as footwear is that one, shirtless guy. Who is taking fashion tips from a guy who can't even pick out a shirt? Meanwhile, the chorus girls, who sing "'cause toes so pretty," aren't wearing anything on their feet at all. Their dresses clearly say that they would rather be trampled to death than walk around in those flip flops. And rightly so.

To be absolutely clear, I am not encouraging anyone to rush to Old Navy tomorrow to buy $1 flip flops. I cannot endorse that sort of grossly irresponsible behavior. 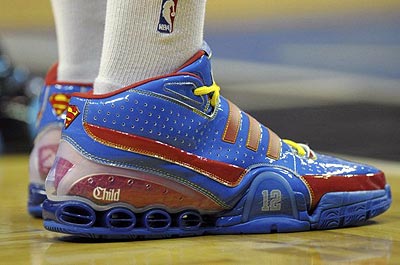 My mother was cleaning out some old scrapbooks today and I found this ad in an issue of an 1967 The Daily Tar Heel newspaper from North Carolina: 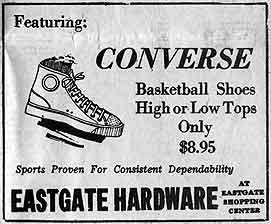 Adjusting for inflation, those shoes should cost me over $50 today. Yet I can buy Nike-produced Converse Chuck Taylor All-Star high-tops for under $40 in local department stores now. That's a pretty good deal, really. Thank you, underaged, third-world sweatshop workers!

School's back in session here in Athens. That brings with it the associated snarled traffic, confused freshmen, and late-night drunken pedestrians. Really, you get used to most of it after awhile. (This is my, what? 7th year in Athens?) It's always the little things that really start to get on my nerves.

This year the annual "get to know Athens and buy our paper" supplement the Banner-Herald published actually encouraged students to wear flip-flops in class. I consider this the most telling sign of the decay of western civilization. Long time reader of my blog (Keith) may remember that I've ranted about this particular fashion trend before. Strapping cheap rubber to your filthy, corn encrusted feet is hardly a fashion statement worth making. And now it's being encouraged by the establishment. Great.

It's not exactly that I lament the passing of hoop skirts or bobby socks, but I think that some things are just too informal to be worn in society. Soon fashion trends will have to involve shirtless people wearing nothing but underwear and belly-button rings. I think it's time to dress it up a bit more, people. Dressing for success does not include any footwear with the word "flop" in its name.