By day 4, Brian and I had visited almost everything we knew we wanted to see in Charleston, so we were looking for things a little off the more beaten paths. We decided to start the day by paying a visit to the only thing in Charleston that had lived through the American Revolution.

They estimate at the Angel Oak may be 400 years old. It looks it.

The thing that I wanted to do next was visit Magnolia Cemetery. Newnan's Oak Hill Cemetery is older, but Magnolia is much, much larger and, though I hate to say it, it's also much, much prettier. (What's with naming cemeteries after trees, anyway?)

Magnolia is adjacent to a complex of cemeteries, including St. Lawrence and the Lutheran's Bethany Cemetery filled with tombstones inscribed in German. The area is full of many stunning tributes to the dead. 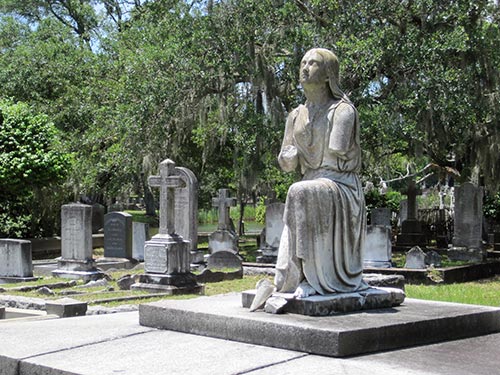 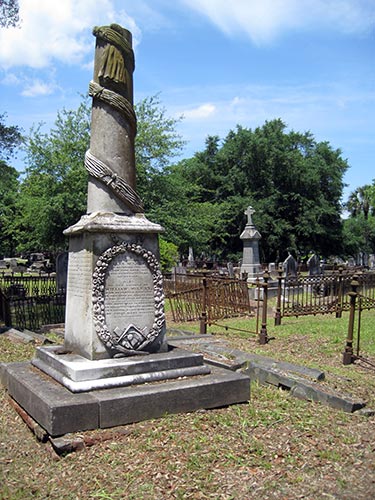 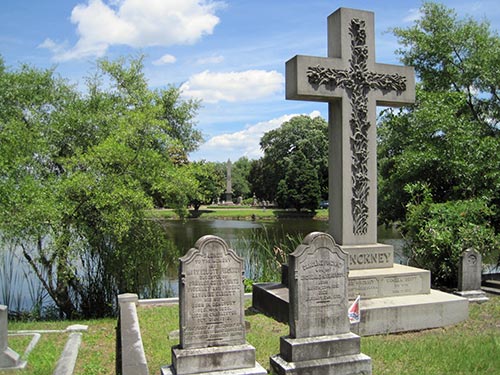 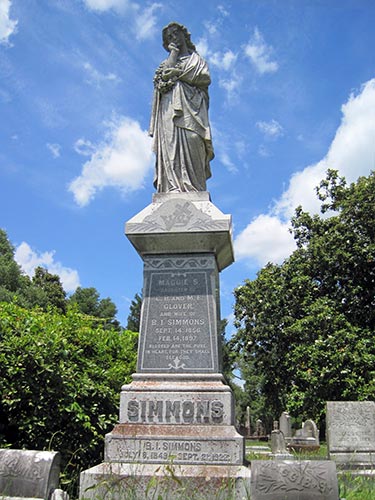 Naturally, being a cemetery in Charleston, SC, it is chock full of monuments to dead Confederates. The men who died testing and running the world's first submarine to sink a ship, the H.L. Hunley, are all buried here (the ill-fated ship killed more Confederates than Yankees), as are many other C.S.A. officers, soldiers, and officials. There's even a monument to all the Germans who fought for the South. 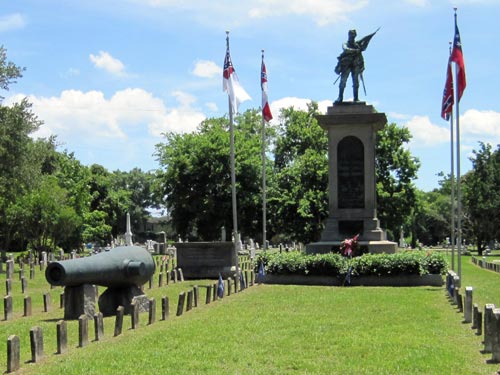 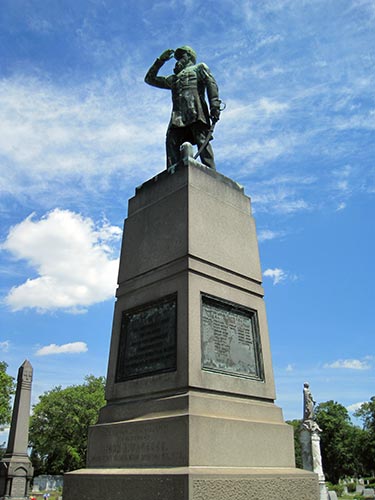 As you can see, there are many spectacular monuments here, I couldn't stop snapping pictures. I took nearly 200. (Thank you digital camera technology!) Brian gave up trying to follow me and sat in his car playing with his smart phone. I tell you, kids today! Who'd rather look at digital pixels than fine statuary like these?

This cemetery is so big, there are even duplicate monuments. All three of these angels (watching over Patrick Darcy, Ellen Turner, and Micheal Shanahan respectively) are the same statue!

In a cemetery this size, the statuary is only part of the pleasure. There are a nearly endless variety of entertaining monuments. For example, C.S.A. Captain John C. Mitchell, who died during the Yankee siege of Fort Sumter in 1864, has his last words: "I willingly give my life for South Carolina. Oh! That I could have died for Ireland!" The tombstone for Corporal Allan Jackson explains that he survived being shot at the Battle of Fredericksburg only to die of Typhoid Fever in Richmond. And don't forget such great names as Harry Brotherhood and Dr. B.A. Muckenfuss. But my favorite tombstone of all: 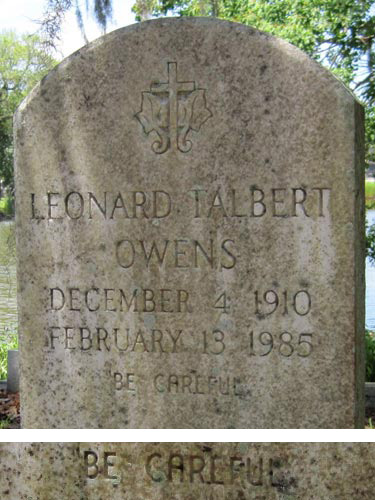 After Brian finally dragged me from the cemeteries, we headed into downtown Charleston to visit the Charleston City Hall. Originally built as the Charleston branch of the Bank of the United States, it now houses the mayor's office and an absolutely stunning council chamber containing several original commissions of famous southerners like George Washington, Andrew Jackson, and John C. Calhoun. (Flash photography was prohibited, but I'm sure no pictures could do it justice.)

Looking for one more thing to see before turning in for the night, we drove an hour to Beaufort, SC. We got there just as the sun was setting, and barely had enough time to photograph the Hunting Island Lighthouse before they closed the park gates. 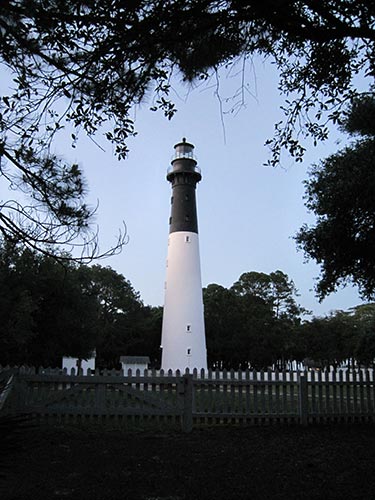 Given how little light there was, I think this picture came out really well.

One more day to document. More to come.

cam Posted Jun. 5, 2015 at 06:48:14 AM
Once asked Harry Keyserling how did his family get from Lithuania in the 1890's to Beaufort, SC. His answer was my grandfather had a friend in Walterboro.

Patriots Point is a museum primarily anchored by its star attraction, the USS Yorktown.

Even at the rip old age of 72, she's an impressive ship. She survived World War II and lived to pull Apollo astronauts out of the sea. But she's showing her age in places: Brian got rust stains all over his white shirt while descending from her bridge.

The volunteer docents — all exceedingly friendly old sailors — were disappointed by our refusal to take the guided audio tour, but they agreed that we were short on time since we also planned to take the ferry to Fort Sumter. We hustled out to the flight deck and looked around as best we could in the time Brian and I had allotted ourselves. The ship is so big, it would probably take two days to explore fully.

Compared to a 20th century aircraft carrier, Fort Sumter feels tiny. Otherwise, its a good looking ruin on a man-made island in the middle of the busy Charleston Harbor. It's small size seems disproportionate to its importance in the Civil War. The big, black battery that now takes up most of the island didn't exist in 1861, so maybe Sumter had more room for whipping slaves back in the day.

We were harried by rain all afternoon, and the recurring thunderstorms that washed over the harbor also kept us from seeing most of the island. The rain came in wave after wave, chasing us back to shore. The ferry ride back was a wet one.

Returning to Patriots Point, we toured the USS Laffey destroyer and USS Clagmore submarine before taking another shot at the Yorktown. This time we walked through the galley where we saw the Navy's super scientific recipe for Peanut Butter And Jelly Sandwiches (Sandwiches No.N 014 00).

And that, boys and girls, is how we won the war.

The first day of my vacation was mostly a travel day. We got a late start and only had time for a brief orientation drive through Charleston before they closed the bridges. ("Bridges closed for maintenance," according to the local news. Nearly the whole town shuts down at 5PM, so I guess they figured anyone not out by sundown was getting what was coming to them.)

On the recommendation of my old friend Jason, we took dinner at Ye Olde Fashioned Cafe & Ice Cream. Their chili dog was worth the drive into South Carolina. Good call, Jason.

Tuesday morning, my traveling companion, Brian, and I set out to see some old stuff in historic downtown Charleston. And we found it!

For all the old buildings in town, the thing that stood out most was the presence of a telephone booth. They literally don't make these like they used to.

Of course, the town is chock full of history. We started in the Charleston Museum ("oldest museum in the United States") and worked our way south down Charleston's "museum mile." We didn't spend much money on admission on the historic houses because I spent all our time in church graveyards.

Desire Peronneau does not have the best tombstone at Circular Congregational Church, just the best tombstone in a picture I took. (The best overall tombstone belongs to "The mortal part of" Mary Smith, "Who after happily exemplifying the Conjugal and Maternal virtues for upwards of 37 Years Was fuddenly arrefted by the hand of Death to the no fmall grief of her numerous Relations and Friends" in 1795.)

Charles Town became Charleston in 1783. That didn't do much to help Mrs. Jackson, whose final resting place remains a mystery. 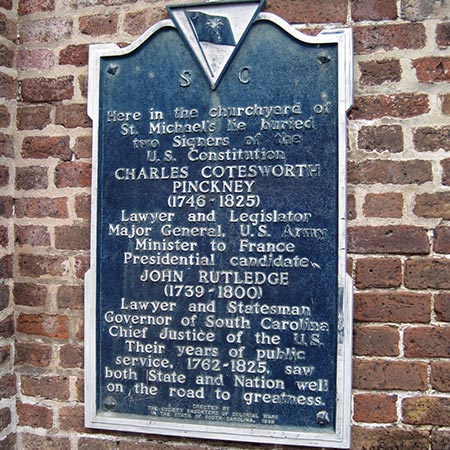 Quick history: Pinckney's opposition in those presidential elections were Thomas Jefferson and James Madison. Obviously, Pinckney lost both times. Badly. John Rutledge remains the only man ejected forcibly from the Supreme Court. John's brother, Ed, youngest signer of the Declaration of Independence, is buried in the only graveyard in town I didn't find the entrance to. I had to leave myself at least one reason to go back.

After the town closed on day 2, we trekked over to Sullivan's island to take a look at Fort Moultrie, the location of the battle that gave South Carolina its nickname and flag. But as it was after 5PM, the place was locked up tighter than a... well, a fort. Day three would give us a closer look at Charleston's military history when we took the boat to Fort Sumter.