A lot of people enjoy being dead. But they are not dead, really.
They're just backing away from Wriphe. 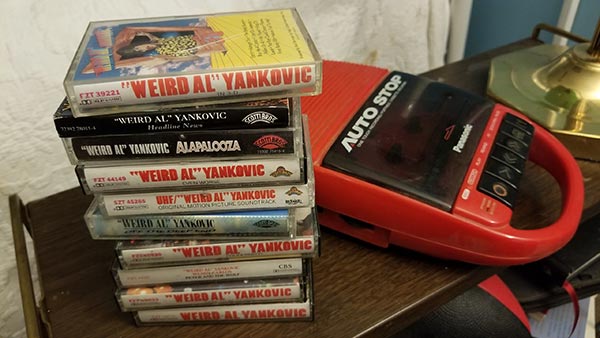 I was in a lousy mood, so instead of watching something new, I turned to an old favorite: UHF.

I can't speak for everyone, but some movies I have a personal relationship with. For example, I remember where I was and who I was with the first time I saw The Princess Bride, The Adventures of Ford Fairlane, and Robin Hood: Men in Tights. For UHF, I remember the first day I didn't see it.

"Weird Al" Yankovic's foray into movies hit theaters in the summer of 1989. The weekend after my brother and I returned from camp (Trey from Camp MacIntosh and me from Boy Scout Camp Burt Adams) in July, Mom and Dad took us to the local multiplex. I wanted to see UHF, but the rest of the family voted for Honey, I Shrunk the Kids. I remember selflessly offering to let the others watch their movie while I watched UHF alone in a different theater. Mom said no. I wouldn't get to see the film until it was rented from Blockbuster a few months later.

UHF was — and still is — a brilliant piece of comedy film making. Most of the film is commercial and film parody in the style of Kentucky Fried Movie overlayed with a plot combining The Secret Life of Walter Mitty and the work of Harold Ramis (where the plot isn't as important as the jokes). The space between the parodies is filled with plenty of good, old fashioned Marx Brothers-style screwball and wordplay. Yankovic is no Danny Kaye, but he's supported by a sterling cast including Michael Richards, Fran Drescher, Kevin McCarthy, Victoria Jackson, Billy Barty, Anthony Geary, and Emo Philips, among others. If you're not laughing at UHF, you have no sense of humor.

Unfortunately, the movie was a flop. I think this may in part be due to its incredible competition. In addition to Honey, I Shrunk the Kids, UHF was up against Batman, Lethal Weapon 2, When Harry Met Sally, License to Kill, Dead Poets Society, Indiana Jones and the Last Crusade, Ghostbusters 2, Weekend at Bernie's, The Karate Kid 3, and Field of Dreams. Ye-ouch. Hell, about the only movie that was out that week that I still haven't seen is Spike Lee's Do the Right Thing. (I've been thinking that it's about time I corrected that oversight.)

The performance of comedies are notoriously unpredictable, making financing difficult. I doesn't help when your comedy is dumped in the middle of the summer blockbuster season. Therefore, it's no surprise that there was never a follow-up. It may be a shame that the world was denied more of Yankovic's madcap antics on the big screen, but at least we'll always have UHF.

Ken Posted Aug. 25, 2015 at 12:14:24 PM
Interestingly enough, in the past week or two as I have been browsing Netflix for things to watch while I work on craft projects, I've hovered over UHF more than once due to the 80's vibe and the high rating. I guess I'll pull the trigger on it. Also, as to "Do The Right Thing", I was working in a movie theatre when that came out. It was a smaller, 2-screen theatre and we did multiple jobs, so over the course of its run I must have seen it (in pieces, never all in one sitting) dozens of times. It's not bad. At least, I found parts of it resonated with me.

Ken Posted Aug. 25, 2015 at 12:15:33 PM
Also it may say something that while I have no recollection at all what the other side of the theatre was showing, I remember "Do The Right Thing" clearly.