When you learn not to want things so badly, Wriphe comes to you.

The difference between humans and other animals is that we're capable of asking the question "why?". We're just not very good at answering it.

Maybe you don't need rules to interact with other people. I do. The following are a few rules that govern my interactions with people I don't know. Thirty-six years of experience have demonstrated to me that all of the following rules are true.

Of course, if I already know and feel comfortable with whomever I'm speaking to, I tend to be a little more... honest. I've discovered that what I call being honest, most others would call being an asshole. So the next time you catch me being an asshole, instead of thinking, "that guy's an asshole," think, "Walter must like me."

Good girls know that two heads are better than one when it comes to bird watching. 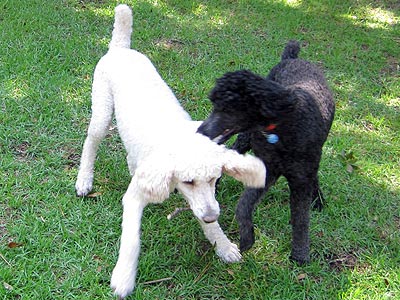 Bird chasing, on the other paw, is every poodle for herself.

Victoria always takes the opportunity to smell the roses. And squirrels.

July bites off only as much as she can chew. In this mouthful.

This past week my brother chastised me for failing to update the site sooner than this. He told me that I was failing to do my established duty to entertain the half dozen people who visit the site regularly.

In my defense, I've been kind of busy. I've been trying really hard to complete the PS2 game Mercenaries. Determined to collect all of the bounties, I had a great deal of trouble with the 10 of Spades. I accidentally killed number 10 and couldn't recover the body that had fallen halfway down a cliff. That was irritating.

Also, I've been working on a script for a new The Movies movie about time travel. I've just about finished writing dialogue. I'll keep you posted regarding release dates.

And that's all in addition to the fact that I've been trying to finish Ayn Rand's Atlas Shrugged which I started reading casually on August 2 last year. I've finished two other books in the meanwhile that I've read only while on the toilet. I really love Rand's Objectivist philosophy, but she really takes her time redundantly driving a point home again and again.

Anyway, it's updated now. Are you happy yet, Trey?