Look at that beautiful plastic nightmare from the Sears, Roebuck and Co. Christmas 1966 catalog:

All that good shit for under $6? I was born a decade too late!

Hmm. Accounting for inflation, six 1966 dollars are worth forty-four 2016 dollars. I wonder how much that thing would sell for today? 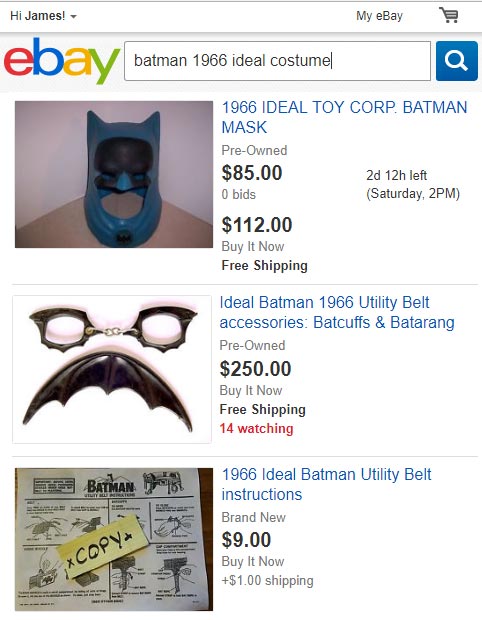 A copy of the instructions costs $9? Damn, nostalgia is expensive.

I just spent the better part of 5 hours in a bowling alley not bowling followed by an hour in a parking lot not parking and an hour in a Waffle House not eating. I'm such a rebel. (It's worth noting that of the three, the only one I was kicked out of was the only one that was free: the parking lot.) I have to admit, it felt a lot like being in high school again, which is somewhat ironic.

I always think of bowling as a middle-aged man's game. Yet the alley, Fun Time Bowl -- named by a 12-year-old Japanese schoolgirl -- was packed with young people, participating in "cosmic bowling." "Cosmic," it seems, is a euphemism for "black lights." While I was previously aware of this particular "cosmic bowling" phenomenon, I've just never previously quite understood how fog machines and ceiling-mounted Lasek machines is supposed to make bowling more fun. And I still don't.

I certainly shouldn't be surprised by the age of the bowlers, as when I was in high school (which is likely the last time I actually bowled unless you count Wii Sports) the lanes were packed with people my own age. But that's the sort of thing that age does to you: it makes you misremember your youth. I suspect that this is nature's way to help you win arguments with your own children. (My father frequently told me, "when I was your age, I had to walk 20 miles uphill in the snow to school." I have always been suspicious of that claim, namely because he grew up in Miami, FL.)

I'm sure that at some point down the road, I'll misremember tonight. So as a friendly reminder to Future Me, let me just say: you bowled a 241 and were the highlight of the evening for everyone present. Need proof? Just read this blog. I wouldn't lie to myself, would I?

Bag Boy 1: "Have you heard that new song by New Kids on the Block?"

Bag Boy 1: "Hell no. They were born before I was! I just know that they have a new song and it's great!"

Some days you just feel old. There's something amiss in the world when Michael Jackson has become a hounded recluse and Guns N' Roses remains in perpetual self-exiled limbo while the New Kids return to corrupt a whole new generation of children. What's next? A Color Me Badd reunion? Can the Funky Bunch be far behind?

For the record: it's Jonathan and Jordan Knight, Joey McIntyre, Donnie Wahlberg, and some other guy.

In the movie Robocop, when post-resurrection Alex Murphy is having a flashback to his previous life in the now-abandoned house, his son is sitting in front of the tv (watching the show T.J. Lazer - thank you, Shatner!) with a bunch of comic books in front of him. Those are Marvel ROM, Spaceknight comic books. Clearly the design for ROM, a toy turned into a comic, was one of many that influenced the Robocop costume. But I think it's odd that a movie that takes place in the future would depict a boy reading comic books that were canceled before the movie was ever released.

It's perhaps a little more odd that the director of Robocop, Paul Verhoeven (also director of Total Recall, Basic Instinct, Showgirls, Starship Troopers, and Hollow Man) believed that Robocop was the story of Jesus Christ in the future. Like Jesus, Murphy rose from the dead and saved his people - police, not Christians - from persecution. It should be pointed out that Verhoeven was the director, NOT the writer of Robocop, who got the idea from Blade Runner. I think the fact that Robocop was driven largely by vengeance sort of puts the whole thing outside the realm of comparison. If Paul wanted to make a point, I think he should have made a film where Jesus crawls out of his cave and goes all biblical on the Romans' ass.

In honor of Batman and Football month, may I present to you the first Batman comic book that I remember reading: The Brave and the Bold #182.

Now, by 1982 I thought that I was already well familiar with Batman, both from Adam West's portrayal on the 1966 live-action show (which I knew from reruns, though I admit that I didn't catch onto the adult undertones for years to come) as well as Batman's adventures with the Superfriends. So when I was given this comic book, I was woefully unprepared for what it contained.

This story takes place on Earth-2, where the golden-age Batman had lived and died. Yes, Batman is dead in this story. And he is also alive, as the Earth-1 Batman was paying a visit to the Earth-2 Robin and Earth-2 Batman's daughter, Helena. Even more confusing is the presence of Earth-2's Batwoman, whose Earth-1 counterpart has apparently been long deceased. Confused yet? I was. Now, as much as some say that the multiple earths made for great stories, they also made it darn difficult for newcomers to grasp the complicated histories of duplicated characters. As the cover blurb says, "What's going on here?" indeed.

Anyway, I loved and hated this story at the same time. While the comic had action and adventure galore, I just plain didn't understand what the hell was going on. In addition to there being two nearly identical universes and multiple versions of each character, the primary antagonist was the ghost of Hugo Strange (represented by his giant floating head) who was using, among other things, the retired classic Batmobile to attack Batman and friends. Um, okay. Sure, why not? Yes, this comic had it all! Alternate universes, skin-tight costumes, supernatural powers, impossible machines, ghosts, evil geniuses, giant heads... it's everything that you think of when you think "comic book."

In hindsight, this book clearly prepared me for decades of alternate Batman mythologies to come. It also established my affinity for the classic 40s Batmobile and giant-headed, misanthropic geniuses. I could have done a lot worse for a first-timer.