Wriphe is 10 percent what you make it and 90 percent how you take it.

You may remember my post earlier this year about a dying Superman writing his name on the moon? Well, apparently DC thought it was a great idea. Five years later, they had another character give it a shot. 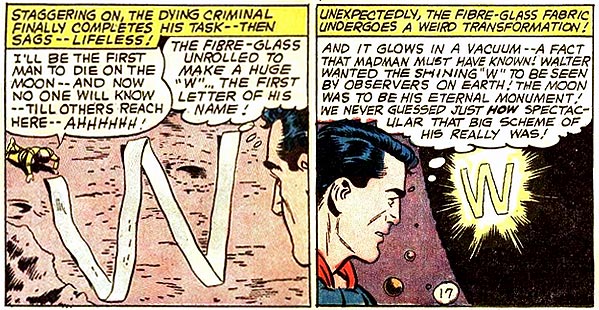 This time around, it's Superman watching a different character spelling his name on the moon. "What irony!" proclaims Batman upon hearing Superman's tale of the criminal's demise. What irony, indeed. 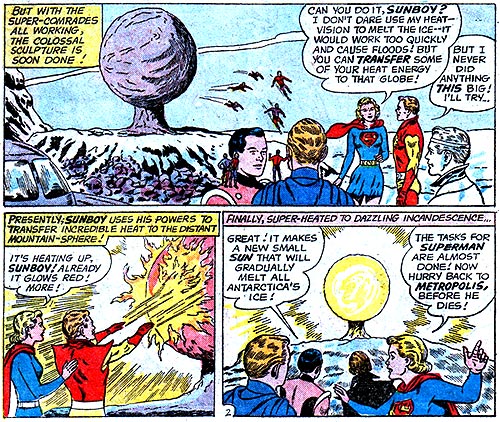 Answer: raise the global ocean levels for world-wide flooding. I'm sure that Superman would be honored by global genocide in his name, Supergirl. If you kill everyone off, who is going to be around to read his farewell message?

Hasn't anyone from Krypton ever heard of sending flowers?

Wriphe [Official Comment]: Posted Mar. 3, 2011 at 01:35:12 PM
I went looking for a pic of Chairface's "CHA" on the moon, and instead found that the concept of powerful fictional characters writing on the moon is actually pretty commonplace: http://tvtropes.org/pmwiki/pmwiki.php/Main.DefaceOfTheMoon

Randy Posted Mar. 4, 2011 at 11:40:27 AM
There is only 1 picture on that page and its the only one that counts. I hope you are prepared to have that writing on the moon in all future posts regarding the moon. Its the least you can do