Wriphe's a laugh and death's a joke; it's true.

Through complete happenstance while searching modern history for a cartoon as stupid as Marvel's truly wretched animated Iron Man series from 1994, today I discovered a cartoon from 1967 about a super-powered President of the United States straight-forwardly titled Super President. The premise of this cartoon was that President James Norcross was bombarded by cosmic radiation and granted the fantastic ability to modify his body chemistry. Like all good public servants granted amazing powers, President Norcross donned a costume and fought super-villains as Super President. (Calling himself "Super President" may seem like a really bad way to maintain his secret identity, but what would you expect from someone whose job prerequisite depended on name recognition?)

You can't tell it from the clip above, but Super President was voiced by Paul Frees. You may recognize his voice as the narrator of the animated Disney educational film Donald in Mathmagic Land. Or maybe as the voice of the immoral K.A.R.R. on television's Knight Rider. Or maybe as the voice of the sentient supercomputer in the sci-fi feature film Colossus, the Forbin Project. (I think those pretty much sum up my personal stages of development via popular entertainment.) For those of you who prefer your entertainment less math/science oriented, maybe you know Mr. Frees' voice as that of Boris Badenov, the nemesis of Rocky and Bullwinkle.

Anyway, what got me most about Super President is that an acting, elected head-of-state is acting as costumed crime-fighter. Presumably, he can authorize himself to do this, but who's running the country while he's battling space aliens? I would think his term would suffer from a lot of pocket vetoes. And fund-raising would be especially difficult, as, in true comic book fashion, villains would always be stealing from the donated funds, requiring an embarrassing unexplained absence while the candidate looks for an empty bathroom stall to don his tights.

I always figured that despite his moral perfection and unerring ability to make the right choice, Superman could do more good as a freelance policeman rather than a politician because of his unique abilities. Surely, I figured, all that bureaucratic red tape could keep Superman's hands tied. Being a politician means negotiations and diplomacy, two things that I had previously seen as obstacles to getting a job done the Kryptonian way: with super speed. Just being elected requires the super ability to compromise your own beliefs to appease the electorate and the political machines. How can Superman, who is always right and honest, make the necessary campaign promises that will enable his own election? (I don't think the phrase, "never mind that now, Jimmy," is going to work in those confrontational televised debates.) 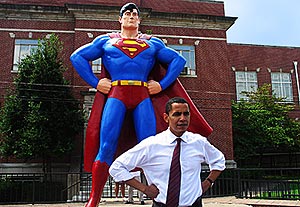 But maybe I'm wrong; maybe he could do both. If Super President Norcross can pull it off, it should be a walk in the park for Clark "doesn't he look a lot like Superman with glasses" Kent.

(And just in case you're wondering, while Super President may be a bad cartoon, it's still better than Iron Man.)

I just watched the new Knight Rider television show on NBC. Finally, someone got a remake of a previous show right. What made the original Knight Rider so popular? Cool talking car, straightforward crime drama, kickass intro theme, and David Hassellhoff. The producers of this show got all of those elements just right. ("Will I see you again?" "I hope so." Me too, Hoff!)

Of course, the Executive Producer of this show is Glen Larson, who just so also happened to be the producer of the original, and I suspect that had something to do with it. Pay homage to the original series (or in this case, act as though you're the rightful heir of said series) and you'll have an automatic audience of crusty, die-hard old-timers like me chomping at the bit for your product. Glad to see that NBC didn't make the same mistake here as they did with the rightfully-canceled-after-one-season Bionic Woman remake.