Wriphe is such a glorious trauma, is it not?

As of today, I have another project on Kickstarter.

This time it's an actual board game, the kind with dice. Lots of dice.

To be clear, the game was designed by Jimmy Sanders of Mythica Gaming. Initial art direction and logo were completed before I was brought on board, so I only provided the graphic design for the board, cards, instructions, and box. And the Kickstarter. So basically everything but the dice and the logo.

Here is the video of Jimmy's mother, Janet, demoing the game (and my work) for Kickstarter.

(And, I guess since I'm being so modest, I should mention that I also edited that video.)

If you'd like to support my work, you can follow this link to Kickstarter.com and follow the project for as little as $1. Thanks for your support.

I don't just stare at the sky! Sometimes I work on coding video games.

For example: Legends of Draxia, a mobile device video game that has just been announced on Kickstarter!

I'm not saying you have to support it, but if you do, thanks in advance.

We're back on Kickstarter.com, out to crowd-fund another game with your money. 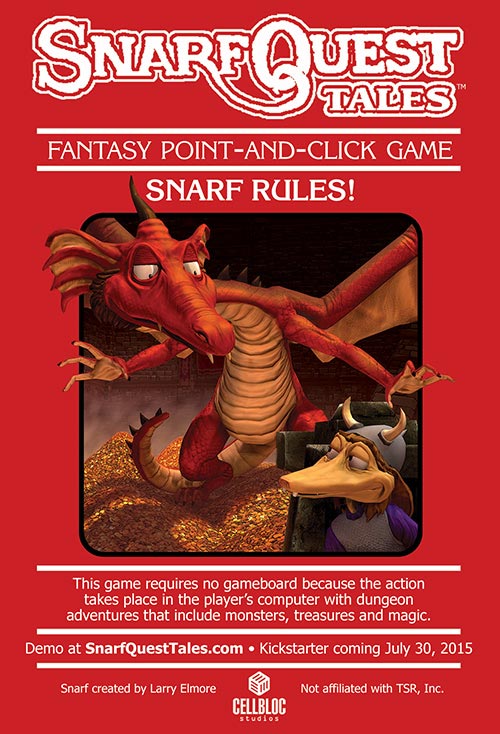 If the name Larry Elmore doesn't ring a bell or you don't know what SnarfQuest is, I recommend that you read our info at Kickstarter before you give us your money. But either way, you're still going to slip us a fin, right? Aw, come on, be a sport!

(If it makes a difference, I wrote the game scenario and dialogue, built the game website, designed all 2D artwork for both digital and print promotion, and even composed the entire Kickstarter page. I'm working hard for your money!)

Attention, please. The Kickstarter campaign I urged you to donate to just 3 days ago has been canceled.

A conflicting opinion about the direction in which we should develop the game grew up between Cellbloc Studios and our development partner, and it became apparent that the best solution was for us to part ways. So we did.

Cellbloc canceled the Kickstarter and plans to take the current game design back to the drawing board to make it the game we want it to be. When my mother heard the news, she gave me a hug and said, "now that you're not doing anything, how about you go outside and blow the leaves off the patio." Thanks for your support, Mom.

Thanks for everyone's support, in fact. I hope that you will consider renewing your pledge to us once we have re-tooled our game design and relaunched our Kickstarter campaign early next year.

Listen up, people. After a few months work, we've finally gotten our project up on Kickstarter. We put a lot of work into this so far, as our handful of pictures and brief movie will attest. Hopefully, we can generate the $60,000 we need to get our video game off the ground and start earning some real revenue.

For those of you who don't know, Kickstarter is a crowd-funding platform, where people with ideas seek many small donations from a large numbers of backers instead of (or in addition to) large donations from a small number of backers. If you've never been before, I'd advise you to take a look around after you throw a few bucks my way. But be sure to throw a few bucks my way.

(Consider a donation as a reward for me for all the hard work I've done over the years in entertaining you with this blog. Football recaps, deer conspiracies, and poodle cartoons. Surely they've got to be worth something.)