Wriphe isn't good, or bad, or true.
It's merely factual, it's sensual, it's alive.

Those zany Silver Age stories are even better when you have no idea what the dialogue is. 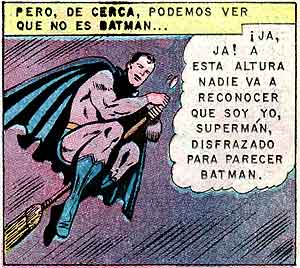 This panel came from a licensed Mexican reprint of Worlds Finest #186. The events in this issue (inspired by Superman's super-ability to repair a statue broken into hundreds of pieces in seconds) is about Batman and Superman's travels back in time (via Superman's super-speed travel through the time barrier), where Batman (wearing a costume super-sewn by Superman from some curtains) falls in love with a woman accused of being a witch in Salem, Massachusetts while Superman uses his powers (including super-invisibility and super-ventriloquism) to make the locals think that Batman is the witch so that they can meet Benjamin Franklin (who flies a kite that is struck by lightning that Superman deflects in time to save the life of Franklin and Batman). Believe me when I say, "they don't make them like this anymore."

The one thing that Superman does in this issue that is clearly benevolent is holding his super-breath while using his super-bite to super-chew through a block of wood so that the puritans will think that the woman they are trying to drown is not a witch and was saved by animals. And does anyone think that the picture of Superman flying on a broomstick while impersonating Batman looks a little too sexually suggestive? For a man who can fly, Superman is grabbing that long broomstick pretty tightly with both hands, isn't he? Really, Superman, try not to show off quite so much. "Man of Steel" indeed.

Why does Batman hang around Superman if Metropolis Marvel is going to do all the work just to ruin his relationships? Ostensibly, this book is supposed to be about the teamwork of the "World's Finest" super heroes, Batman and Superman, but it reads (in Mexican) more like a Martin and Lewis story, where Batman is the bumbling fool who falls in love, and Superman is the straight man with talent who bails him out after making him look like a dick. Thanks, Superman. Friends like you we don't need. Don't you have a child to abandon somewhere?