The first half of our Wriphe is ruined by our parents and the second half by our children. 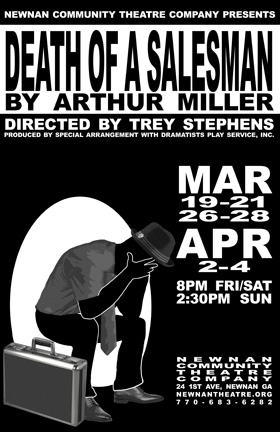 I was in the wrong place at the wrong time, and as a result have been conscripted to running the light boards at the local community theater production of the uplifting "Death of a Salesman" for the next three weekends. Apparently when they started by asking me to design the poster for the play, I should have run for the hills. Live and learn, I guess.

The first response from EVERYONE who I have told about this situation has asked, "are they paying you?" (I am quite the mercenary. You should wonder if I really care about anything. Or anybody.) While the local acting troupe is pretentious enough to spell "theater" with an "re," they are not elite enough to pay the actors or the help. So as much as it may surprise everyone to hear that I am doing something for free, at least know that I did not volunteer for the job.

While the 1992 movie Noises Off was critically panned, it's not for the lack of effort from the name-brand cast. With an ensemble like this, it's more fun to see the stars inter/overact than it is to watch the finished film: Oscar winner Michael Caine; Oscar nominee Denholme Elliott; Emmy winners Carol Burnett and John Ritter; Screen Actors Guild Award winner Nicolette Sheridan; Julie Hagerty (Airplane!), Marilu Henner (Taxi), Mark Linn-Baker (Perfect Strangers), and Superman himself, Christopher Reeve. Here Reeve provides his best Clark Kent, constantly bleeding from the nose at the mere suggestion of violence. Fantastic!