I wish Wriphe was more like video games because then I would always get the girl.

The Associated Press reports that the city of Hoschton, GA was denied the world record for "Most Scarecrows in One Place" by Guinness World Records despite having nearly 4 scarecrows per resident. Apparently, Guinness doesn't like to walk around town to find the scarecrows, insisting that the scarecrows needed to be all in one, easily viewable location. My first thought upon seeing this was, "damn you, Guinness, for telling people what records they can break!" My second thought was, "who wants a bunch of scarecrows in their town, anyway?" 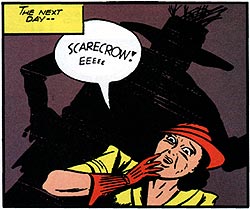 Look, Hoschton (pronounced Husch-tun by the old-timers) doesn't really have that much going for it. For years, it's been overshadowed by it's neighbor, Braselton, better known as the hometown of "actress" Kim Basinger. If you'd been overshadowed by somewhere that is only famous as Kim Basinger's hometown, you'd probably be itching for something to call your own, as well. And now further rejection by Guinness may be the last >ahem< straw. A combustible mix of jealousy, rejection, and intimidation: that's how super-villains are born. Could Hoschton be the world's first super-villain town?

Fortunately for Hoschton, there's now an alternative to crime. The World Records Academy (which rather suspiciously has a large image proudly proclaiming their association with PayPal on the homepage of their website) has stepped in and given their vote to Hoschton for the "World Record for Scarecrows." (At the time of this writing, their press release is visible on their media page, right after "Most Tractors in a Parade," "World's Strongest Boy," and "Longest Limbo Skating.") And according to the world's foremost resource for truthiness, Wikipedia, Guinness has graciously agreed to "let the city consider and promote itself" as the "Scarecrow Capital of the World." So maybe all's well that ends well for Hoschton.