Tonight the Georgia Bulldogs will take the field to kick off the season versus the Boise State Broncos. That previous sentence would deserve an exclamation point if Georgia weren't planning to wear this: 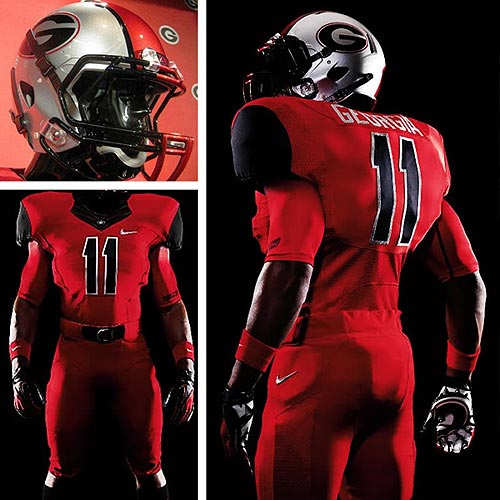 Is it the worst thing I've ever seen? No. (Anything worn by Tennessee comes to mind.) But neither is it better IN ANY WAY than the uniforms that Georgia normally wears. Seriously, that's a lot of red, broken up only by all that damn, high-contrast Nike advertising splashed all over it. Am I supposed to be cheering for Georgia or Team Swoosh?

Said Mark Richt to the Atlanta Journal-Constitution: "I think there are a lot of people that just don't want to get away from [tradition] and I don’t blame them. That's the reason we're sticking it out there two weeks in advance, so everybody can get over it." That's just plain disingenuous, Coach. It's not that we are stuck on tradition; it's that we have taste. Change for change's sake, especially when you're changing from a fantastic looking uniform to that... red loony-tard, isn't something that we the fans can endorse. No, Coach, this is a marketing ploy, clear and simple.

Marketing ploy or not, someone must be in favor of them, right? According to that same article linked above, wide receiver Tavarres King said, "I think they're awesome... I love what Nike has done for us. We're blessed to have those uniforms. I'm excited about them." Blessed? I don't think that word means what he thinks it means. I'm no biblical scholar, but I seem to recall from Sunday school that God is opposed to violent men wearing all red.

So the players like this costume. I don't know why DC Comics needed to relaunch their comic books to instill more interest with the general public; clearly football players want to be super heroes. And badly-designed ones at that. Too bad that when we see one of our offensive linemen in that costume tonight, he's not going to look like a superman, he's going to look like an over-sized Nike® brand tomato.

Hopefully we'll lose horribly and these uniforms will be hastily abandoned into the same dusty closet that still holds our all-black unis, unseen since Alabama spanked us in 2008. Good riddance to bad rubbish.