Wriphe is fleeting -- and therefore endurable.

Everyone wears black to funerals. 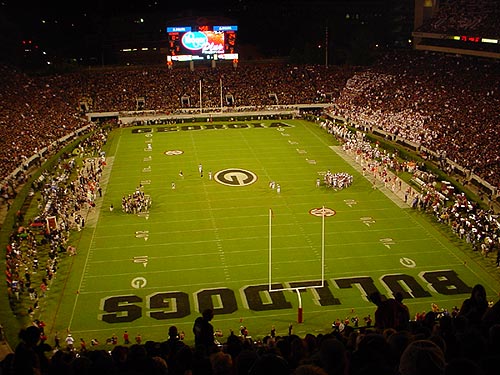 I've made it no secret that I hate the black Georgia jerseys. I hope that the memory of this week's debacle, a 41-30 loss to Alabama will keep them in the closet for a long time. The final score isn't even close to describing the 31-0 beating that we were taking by halftime.

Even the fans got on my nerve at the game. Though I was quite surprised that the crowd kept trying to rally the Dogs (we're usually so quick to throw in the towel when the chips are down), there seemed to be more jerks around than usual. Within reach or me were the drunk Georgia Tech chick who kept reminding us that she had seen more lopsided defeats at Tech, the asshole behind me who took a break from talking on his cell phone to insist that I sit down because he didn't want to have to stand to see the mess on the field, and the Bama fan dressed like Bear Bryant who kept chanting "overrated" and "blackout." Fun, fun, fun. I travel for hours each way to see UGA play this poorly while surrounded by these strangers? Something must be seriously wrong with me.

Still, I'm not too down on the loss. We started the season with a lot of hype, and if there's anything for which hype prepares me, it's disappointment. There's a long way to go yet this season, and if the Dogs can learn from this fiasco, we might earn a rematch in the SEC Championship game come December.