Looking at yourself in a mirror isn't exactly a study of Wriphe.

I tried to warn you. I urged you to pick up your pitchforks and light your torches. But I was too late. The Uprising had already begun.

When researchers in North Dakota set up "nest cams" over the nests of song birds, they expected to see a lot of nestlings and eggs get taken by ground squirrels, foxes, and badgers. Squirrels hit thirteen nests, but other meat-eaters made a poor showing. Foxes and weasels only took one nest each. Know what fearsome animal out-did either of those two sleek, resourceful predators?

That's a quote from a recent article at i09.com, but the article's sources are over a decade old! Apparently, the signs have been there the whole time, we've just been turning a blind eye. Remember Bambi? Walt Disney was trying to warn us in 1942, but we were too worried about Japs and Nazis to recognize the real danger.

When we were in high school, a wise man once told me that "there ain't nothing a deer won't eat except turnip greens and collards." I thought he was talking about things that grew in the garden. I didn't realize he meant me!

Don't ignore the warning signs. Eat more deer before the deer eat you!

The University of Georgia College of Agricultural and Environmental Sciences has just released a 300-word report warning Georgia residents that there is very little that can be done to keep deer from eating their gardens. This is not news. Anyone who has read my extensive research on the subject will already know that deer will eat anything: 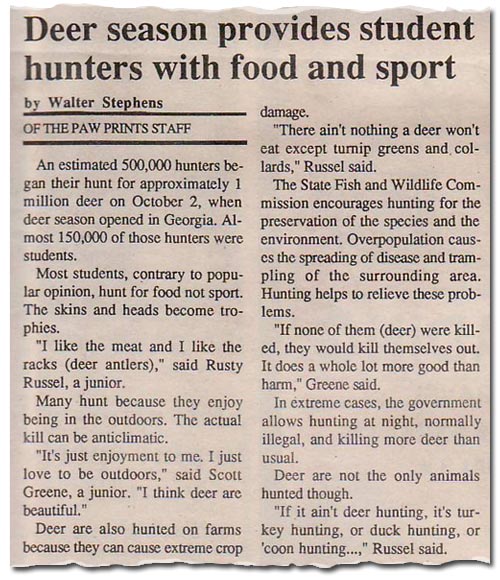 I was convinced that 1990 article for the school newspaper was going to get me beat up in high school. I didn't realize at the time that the only thing standing between me and an army of insatiably ravenous deer were teen-agers with guns. I'm sure we all feel much safer with that knowledge.