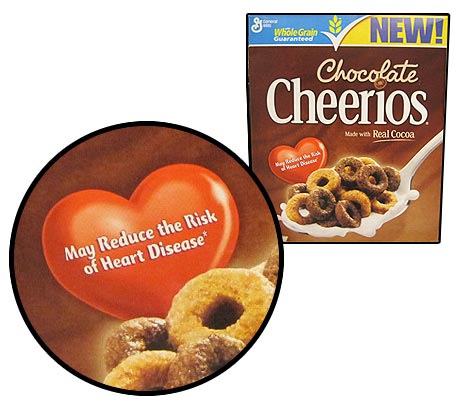 **Anyway, it's chocolate; you know you want it. Go ahead, take a bite. You can stop anytime you want.***

****Whatever. In any event, there's still a spoonful of real heart in every bowl, and that we don't have to qualify with an asterisk!

In between networks promos and local cable advertisements during The Penguins of Madagascar (clearly they've run out of good names for cartoons these days) on Nickelodeon, I encountered two the most senseless commercials I've seen in recent months.

The first was an ad for Honey Nut Cheerios featuring their animated mascot, Buzz. The only problem with this commercial was that it didn't make any sense. Honest-to-goodness transcript as follows:

Honey Geyser erupts, but then is drawn back in on itself in a honey vortex.

BUZZ: Where's it going? Come on!

No one follows Buzz into the vortex.

BUZZ: Where am I? And the honey... It's being sucked into that mummy's tomb!

BUZZ: I've only got one shot at this!

BUZZ: And so's our honey, so everybody can have delicious Honey Nut Cheerios.

VOICEOVER: It's the honey sweet part of a good breakfast. From the hive that's nuts about honey.

Lessons learned: honey comes from honey geysers, is coveted by bee-mummies (who present only a mild inconvenience), and honey dippers are electrical in nature. None of which makes me want to eat cereal.

The very next commercial broadcast was done infomercial style for Touch-N-Brush, "the hands-free toothpaste dispenser that works with just a touch!" The highlight of this ad is the series of images of apparently physically or mentally handicapped people frustrated by messy, hard-to-use, and difficult to understand toothpaste tubes. "You squeeze. You roll. You press. Now your bathroom looks a mess!"

Maybe this commercial is speaking to the portion of America I've never visited, but I don't recall seeing any bathrooms where dried toothpaste was on all the countertops, sinks, and walls as depicted by the users in this commercial. If that's how these people squeeze toothpaste tubes, I'm interested in watching them squeeze ketchup, shake hands, or hug their children.

Lessons learned: Squeezing a tube of toothpaste is hard. Can't someone else do it for me?