It can only take a moment to waste the rest of your Wriphe.

I finally have a replacement for Wendy's as my favorite burger chain. Considering that they serve Pepsi and not Coke, I think you'll recognize the significance of my declaration. 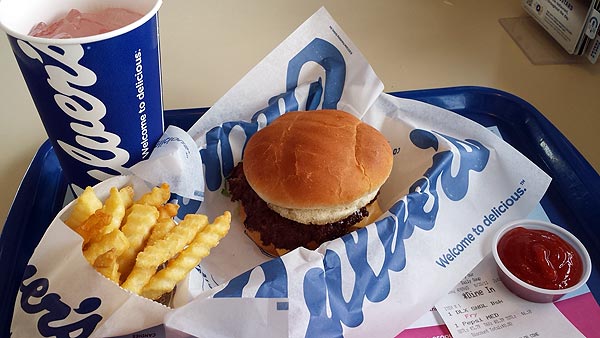 Say hello to Culver's. Recommended by the boss of a friend, the Culver's ButterBurger® is better than anything I can find around my house (now that Wendy's has decided that they only make burgers for yuppies). Welcome to delicious™ indeed!

I've mentioned before that 2011 is the Year of the Suck. Unfortunately, it's not over yet.

As some of my 12 readers probably know, I've always preferred Wendy's hamburgers. There isn't really a Wendy's nearby my house, but I'm always willing to drive out of my way for their burgers. Their 1/4-lb Single is a very tasty treat that can make even the worst day a slight bit better. Or at least it used to.

Late last month, Wendy's rolled out it's reinvented hamburger, "Dave's Hot 'N Juicy," in a media blitz. It's advertised as a better burger made with "premium" ingredients. And it's significantly more expensive than before. Too bad it doesn't taste any better.

I tried my first one yesterday, picking up a pair for my father and me to enjoy while watching the latest Dolphins' loss. Before I could even take my second bite to confirm that the first bite was as bad as I thought it was, my father turned up his nose and said, "didn't these used to be good?" Yikes.

The burger may be juicier, but it is also more bland. The buttered bun tasted thick and unpleasantly heavy. The tomato slice I had on my sandwich still had the stem on it. The burger had enough cheese on it to glue the whole thing together, but it failed to provide any extra taste. There were all bad signs, and do not encourage me to ever have another.

Like everything else this year, it sucks. I'd say that at least they still have tasty chicken sandwiches, but rumor has it that they will be changing that recipe in 2012. I guess at least from now on I'll be saving gas.

[UPDATE 10/05/11: I decided to give Wendy's the benefit of the doubt, and ordered a Single combo at the location different from the one I ate at on Sunday. This burger was better, much better, than the last one. It tasted more similar to the Wendy's hamburgers that I loved in the past. Maybe that crappy burger was a one-time aberration. Perhaps this crisis has been averted. For now.]