Sorry, no post yesterday, but I have an excuse.

See, I was going to go to the UGA game versus Florida Atlantic University with Trey. However, I simply couldn't make myself care about spending 5 hours in a car (not to mention the $40 in gas and $20 for parking) to witness the Bulldogs beat a 43-point underdog. The only draw for the game was the ceremony to officially declare Russ, the UGA fill-in mascot for the past 3 years, as the official UGA IX. I'm not really big on ceremonies, so at the last minute, we decided not go.

Our plan was instead to sit around the house with Mom and watch the Florida/Tennessee game on one tv and stream the GA/FAU game on the computer. It sounded like a good plan. Unfortunately, the football gods frowned on my passing up stadium seats for the couch, and the cable went out. Since we have a cable modem, we couldn't watch football on television or the web. What a disappointment.

I don't think I'd do anything differently in repeat circumstances. Georgia went on to win 56 to 20 without my participation, I still have those 60 dollars in my bank account, and I'll definitely be back in Sanford Stadium next week when an actual SEC team finally comes to town. Maybe there is a lesson to be learned in this experience, but I guess like any good bulldog, I'm too stubborn to learn it.

What a difference a week makes. Last week Sanford Stadium was abuzz with nervous anticipation as SEC rival South Carolina roared into town in their current bid for national dominance. This week felt more like a relaxed church reunion as Coastal Carolina limped in to take their whipping from a far superior Georgia team.

See that? That's what Sanford Stadium looks like in the 4th quarter of a 59-0 football game. Even the students had long gone home.

Georgia normally opens the season against a weak opponent to try to pick up steam for the coming season. Because of our participation in the Chick-Fil-A Bowl (Pre-Season Edition), we don't get our first gimmie game until today. And boy, was it a gimmie. Coastal Carolina found no way to compete with Georgia, outmatched on offense and defense. Even their mascot seemed deferential and outclassed, spending most of the game looking but unable to spot any of the few Coastal Carolina fans in attendance.

I mean no disrespect to the Chanticleers. Their slaughter was simply a necessary sacrifice to the football gods to restore Georgia's honor after two consecutive losses to open the season. And the Bulldogs made the most of the situation, playing hard enough that even Russ, the curmudgeonly substitute-Uga, came out of his dog house to see what all the fuss was about. Briefly. 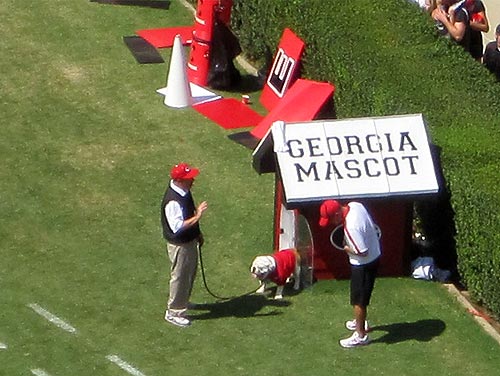 No point to get too excited. After all, in 4 previous games against Division I-A schools in the past decade, the Chanticleers had lost by a combined 164-13. Now make that 223-13. Go back to sleep, Russ. There's nothing to see here. 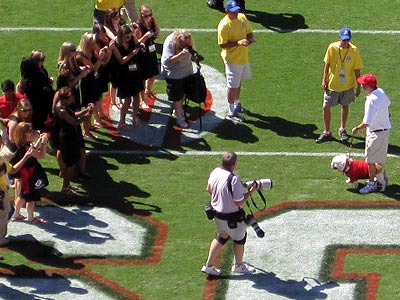