Wriphe seems but a quick succession of busy nothings.

According to The Hollywood Reporter, DC Comics is planning to restore their lapsed Vertigo imprint. Vertigo was prominent in the late 1990s as home to creator-owned, outside-the-mainstream, usually non-superhero storytelling. My personal favorite previous Vertigo title was Garth Ennis' Preacher, in which Jesse Custer hunts down God to make the creator atone for the suffering he has brought to humanity.

I'm particularly pleased by this announcement mainly for one reason: Mark Russell. Russell is the writer whose sharply satirical take on the most hypocritical and destructive tendencies of modern American life have made placed recent DC series Prez, The Flintstones, and The Snagglepuss Chronicles on my must-read list.

Next year, Russell looks to be starting a new Vertigo comic, Second Coming. Per the advanced solicitation description:

God sends Jesus to Earth in hopes that he will learn the family trade from Sun-Man, an all-powerful superhero, who is like the varsity quarterback son God never had. But, upon his return to Earth, Christ is appalled to discover what has become of his Gospel and vows to set the record right.

Great Caesar's Ghost! What morally perfect, solar-powered, faster-than-a-speeding-bullet, stronger-than-a-locomotive superhero could be the inspiration for Sun-Man? (Hint: it's not Batman.)

Yes. I will definitely be reading this.

Preacher season one is now complete, and I have to say that all my earliest apprehensions were completely unfounded. If you liked the comic, you should be watching this. I anxiously look forward to the next season. The sooner we get to Herr Starr's penis-head and the scion of Christ, the better. There's not enough gun to keep me away.

Re: the new Preacher series on AMC.

The pilot came on tonight. I was prepared to hate it. I mean really, really not like it.

I'd read several interviews strongly suggesting that the show was going to deviate in some pretty significant ways from the source material. While I believe that any story should be retooled to fit the medium used in the telling (for example, 2-hour movies shouldn't be word-for-word videos of 400-page books), no adaptation should remove the heart and soul of any key story element. If you believe you have to do so to tell that story in your chosen medium, you should probably be telling another story instead. 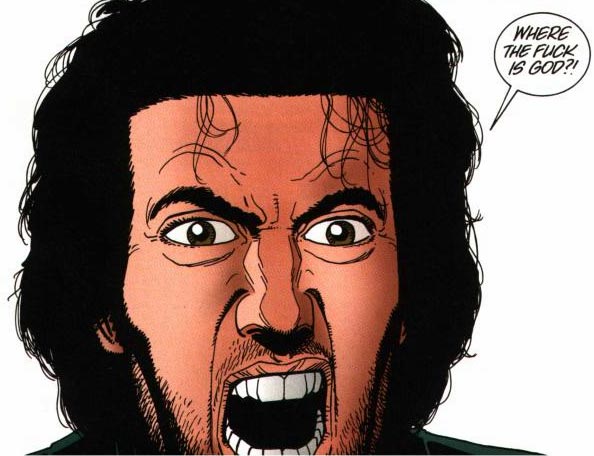 That's why I was surprised to see that the AMC television pilot episode practically bent over backwards to leave open the possibility that we will see some of these elements in future episodes. Honestly, that alone exceeded my expectations.

While it might have played coy about some future story lines, the Preacher television show clearly does change a lot. Story timelines are changed. New minor characters are introduced, and existing minor characters are extensively overhauled. The Preacher's love interest has been radically overhauled. However, there is at least one thing that the pilot has dutifully reproduced: the protagonist. Preacher's 1996 Western genre anti-hero Jesse Custer is alive and well on television in 2016. It was like meeting an old friend I hadn't seen in years. If nothing else, I have to say that I liked that.

So I can't say that I hated the Preacher pilot. For the time being, I'll keep watching. And just like Jesse Custer, I'll be holding its feet to the fire if it steps out of line.

Found item: this ticket stub is 10 years old this week.

It's from the midnight debut of Star Wars, Episode 1: The Phantom Menace at the Regal Cinemas Hollywood 24 at I-85 (built on the location of the old I-85 Drive-In). Ah, to be young and have faith in George Lucas again.

Appropriately enough, I re-discovered this ticket stub in my copy of Preacher: Ancient History. It's going back so that I can find it again in 10 more years.