Wriphe will not break your heart. It'll crush it.

As you may recall, I destroyed Mom's 2012 Kia Optima back at the beginning of August. Replacing it has turned out to be a bit of an uphill journey.

After a month of insurance negotiations and car shopping, Mom picked out a 2017 Nissan Murano the first weekend in September. (She was looking at a model with a heated steering wheel, and I talked her into saving $5000 by buying a slightly different car. As you will see, I should have kept my mouth shut.) 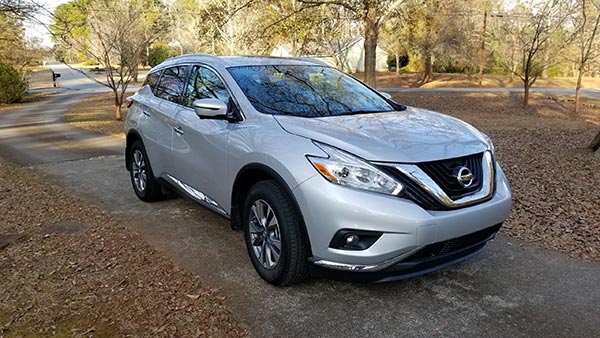 The Murano had all the safety features she wanted plus luxury to spare. Unfortunately, it also had problems. We only had it for two weeks when I discovered rust under the dashboard (and under the driver's seat, and behind the rear seats, and around the spare tire . . .). It took Nissan another month to declare the problem a factory defect. Eventually, Mom negotiated a buyback under Georgia's Lemon Law. Goodbye, sweet Murano.

(On a related note, we're selling a set of black WeatherTech® floor mats for a 2017 Murano, if anyone is in the market.)

Mom started her car search over from the beginning. She still wanted safety features, but she never got used to driving such a large SUV. So she got something smaller instead. Introducing Mom's 2018 Ford Escape!

I promise you, I've been over the whole car with a magnifying glass. There's a scratch on the interior of the driver's side headlight cover, but I can't find anything else wrong with it. It certainly isn't rusted. (And it does have a heated steering wheel.)

The Escape only has a three-year warranty on the interior electronics, so if I'm going to ruin this one, I need to act fast. I'll keep you posted.

Nissan has been running a commercial showing their truck snowboarding down a mountain and executing a barrel roll. Below this impossible stunt, the commercial super-imposes the disclaimer: "Fantasy. Trucks can't snowboard. Do not attempt." The font is small and white, overlaying a background of white snow. Clearly, Nissan wants me to be able to read this.

Why is Nissan allowed to run this commercial at all? The Federal Trade Commission Act requires that "advertising must be truthful and non-deceptive." But there is no truth in this advertisement; Nissan admits as much in their disclaimer. Is it not deceptive to show a car doing something that it cannot do if you put small, hidden text on the screen contradicting what you are seeing? If that's the case, we'd better prepare for a tidal shift in advertising in 2012.

Under this same pretense, ads should show Kellogg's Frosted Flakes -- used as part of a complete breakfast -- as the secret to passing standardized testing without studying. So long as the voiceover denies what is being shown, advertisers could show Lipitor giving people the heart of a lion, Ambien makes someone sleep like a hibernating bear, or Cialis grows your cock into that of a stallion. If you pop the top of a Bud Light, a super model will immediately come and jump your bones. Literally.

Will consumers have any idea what these products actually do? No, but we will be entertained. And Nissan obviously thinks that is more important than making cars that we would want to buy.

Trey Posted Jan. 5, 2012 at 07:08:20 PM
Aren't some types of products exempt from the "truth-in-advertising" clauses? I think you are being overly harsh and my water-skiing Mazda agrees!