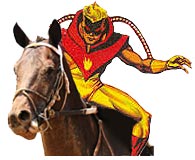 I was really pulling for Pyro in today's 134th running of the Kentucky Derby. However, Pyro was unable to catch fire after being snuffed by other runners right out of the gate. This is two consecutive bad races for Pyro, who appears to have burned out after scorching the field with blazing speed earlier in his career. (I'm sorry for all that, really I am.)

Other sad news was the euthanization of the filly Eight Belles following the race for two leg fractures. Ironically, "eight bells" is nautical slang for the end of a ship's watch shift and is used by sailors as a euphemism for death. Someone probably should have told this to the filly's parents.

The moral to this Kentucky Derby is be very, very careful what you name your horse.