I've been busy this past week installing a fence at my brother's home in Dublin, GA. I've been calling it a cyclone fence, but you probably know it as a chain link fence. Turns out that cyclone fence got that name from the Cyclone Fence Company of Waukegan, IL, a trademarked brand now owned by U.S. Steel.

So I've been committing the same error as people who call a copy a Xerox, facial tissue Kleenex, a hook and loop fastener Velcro, and soda Coke. (For those paying attention, the grammatical error of substituting the specific for the general is called a metonym.) Worse, Cyclone Fence was initially a northern brand (though the concept of the chain link fence was invented by the British), so I have unwittingly been using a Yankee word! I apologize to ya'll for this error and will try to correct my usage in the future.

P.S. I'll post a picture of Trey's fence once I've developed my the pictures still in my kodak.

[UPDATE 08/03/10]: Pictures. Note the DirecTV dish in all three pictures for site reference.

Start of Day 1: It doesn't look that big, right? Next time you shovel the concrete. 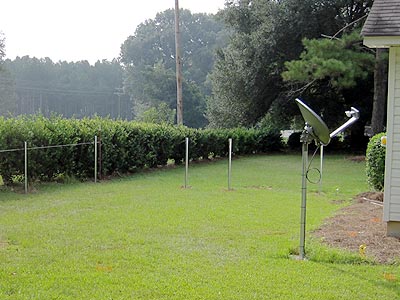 Start of Day 2: I lost track of how many fence posts after I was attacked by the fire ants.