Wriphe is painting a picture, not doing a sum.

Once again, it's a beautiful September Saturday in Athens, the perfect time to kick off the 7th Annual Wriphe.com Batman and Football Month! (And I have the sunburn to prove it!) 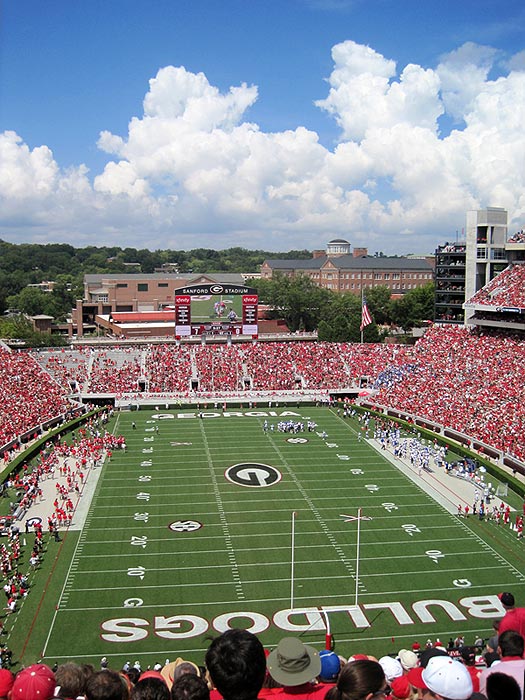 The Bulldogs start the season ranked #6, but we won't be there long if we play any more games like we played today. Yes, we won 45 to 23, but not for lack of trying. Not that the University of Buffalo Bulls lack talent, but they shouldn't be threatening a Southeastern Conference team for the lead going into halftime. I was worried until, with time expiring in the second quarter, UB settled for 3 points instead of attempting to score a touchdown and take the lead. If UB wants to play to lose, we'll be glad to let them.

The Dawgs were missing 5 starters due to injury and suspension, and the defense played like it. Mental mistakes were the rule of the day, mistakes we cannot afford to repeat against a team trying to win. At least the two rookies in the UGA backfield, Todd Gurley and Keith Marshall looked like they'll turn out to be some damn good Dawgs, so there's hope for the season after losing last year's running back Isaiah Crowell to his own stupidity.

Please note that no Dawgs were hurt during the making of this picture. Colorado brought their 900 pound buffalo mascot, Ralphie IV, to Athens to lead the team onto the field. (Ralphie IV, by the way, was donated to Colorado by Ted Turner.) Earlier this week UGA athletic marketing director John Bateman told the Atlanta Journal-Constitution, "It's David and Goliath. But what's that old saying, 'It's not the size of the dog in the fight, but the size of the fight in the dog'?"

Bulldogs, by the way, were originally bred for -- what else? -- fighting bulls. Ralphie IV, however, is not a bull but a female buffalo. That should have been our first clue that we were in trouble.

We played like we didn't understand the game for 3 quarters, only to pull it together in the final 10 minutes of play for the victory. The entire game was a demonstration in coaching: be Dan Hawkins' play selection and execution in the 1st half, be Mark Richt's strategic determination in the 4th quarter. (Just plain be somewhere else for the third quarter.)

Colorado's excellent ball fakes kept our undisciplined defense confused. Meanwhile our offense decided to go pass-happy with our true freshman quarterback, ignoring the 3 talented runners that have won us the last 3 games. (I call this Tommy Tuberville Syndome after Auburn's similar bizarre and losing strategy with Cadillac Williams and Ronnie Brown three years ago.)

I should have taken a picture of the guy who sits next to me. He looked like he was going to have a stroke for the final hour of the game.

In the end, we won. And it was exciting. But I don't exactly want to go through this every week.