Accept what Wriphe offers you and try to drink from every cup.

Today UGA hosted Charleston Southern University. I only went to this game for one reason: I couldn't find anyone to take the tickets. I almost didn't go, but I finally decided that someone had to go to the game to cheer on the Bulldogs. And today, that someone was me. 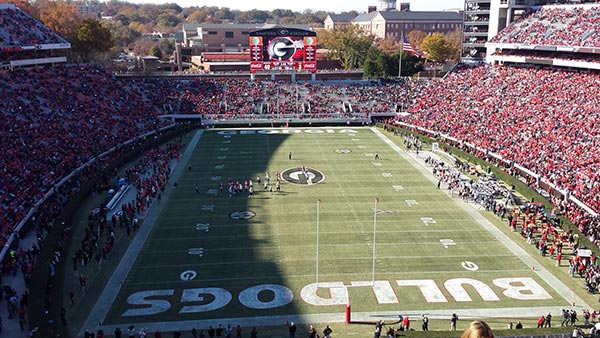 Despite the final score being the expected blowout (55-9, UGA), I still had a good time. The most fun I have at games are when I'm least expecting to. Life constantly reminds me that keeping my expectations low is the key to being satisfied.

It's worth mentioning that UGA pulled out all the stops in a belated halftime salute to Veterans Day, including visits from Medal of Honor recipient General James Livingston, an assembly of Purple Heart recipients, and "God Bless the U.S.A." singer Lee Greenwood. (Aaron Murray also made a surprise appearance, though I don't think that had anything to do with the day's theme.) Once that show was over, we went home.

(Postscript: Mom spent most of the ride to and from Athens arguing with Sirius XM customer service about a malfunction of the Sirius Traffic app. Google arrived to save the day just before she lost her temper. Thanks Google!) 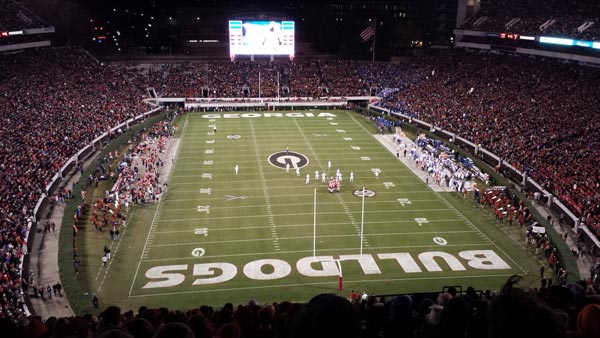 This LSU/Georgia game was probably the most exciting game I've seen in Sanford Stadium in the past decade. 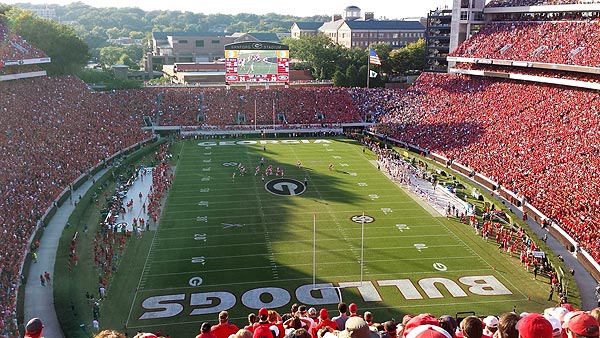 I mean, I've seen some great games. Back when Tennessee was still the team to beat in the early 2000s, the atmosphere was electric. Before Cam Newton destroyed them, Auburn games always had a great atmosphere. I seem to recall that Steve Spurrier's first year as coach of the Gamecocks was a fantastic game. This one beat them all.

ESPN's College Game Day was in town for the game (the third time since I've had season tickets), and the fans were really worked up hours before kickoff. The crowd was on its feet making noise almost continuously for all for quarters. I screamed my head off, and I thought I was going to be sick when LSU got the ball in the final 2 minutes down by 3 points. (The Georgia offense scored nearly at will, but the secondary couldn't stop anything. It was terrifying!) I don't know that I've ever been so exhausted after a game.

In fact, the whole night was just crazy. UGA head basketball Mark Fox dressed in body paint to hang out with the student section. Former UGA golf star Bubba Watson tried not to upstage his wife, former UGA basketball star Angie Ball Watson, as she was celebrated between quarters. Olympic gold medal winner Allison Schmitt was among feted members of the SEC champion UGA swimming/diving team. After the game, David Pollack danced with his kid in the end zone as Mark Richt sought out and hugged his wife. When Aaron Murray came out of the locker room for an interview with ESPN (on the northwest corner of the field after the game), the rest of the team came with him. They lined up single-file to hi-five the crowd still trying to leave the stadium. I've never seen anything like that.

It was all pretty damn awesome. This is why I attend football games.

It's finally September again, and last night UGA played its first game of the season (losing 35-38 to Clemson thanks to some spectacularly lackluster play by Aaron Murray). That must mean we've finally reached Wriphe.com's 8th Annual Batman and Football Month!

Long ago, a friend asked me which I preferred more: Batman or Football. I think I have finally decided that it's football.

Yes, Georgia may already have a losing record on the season, Aaron Murray may be 1-10 vs top 20 opponents in his career, and Mike Bobo may still be calling our plays. However, in 2013, I've bought 6 tickets for UGA home games but not a single Batman comic book. By the rules of Capitalism, that's a clear win for football.