My life didn't please me, so I created my Wriphe.

I'm watching a movie right now that is kind of boring. So let me kill some time by typing up brief reports of some other films I've seen.

78. (1937.) The Stepfather (1987)
Is this a thriller? A slasher? The Stepfather tries to be both, which I suppose is a fitting metaphor for its titular antagonist. I don't think I'll watch it again.

79. (1938.) Sparkle (1976)
This musical drama is made of all the same stuff as Dreamgirls, just not quite as well. I suspect that has more to do with the era when it was made than anything else. As a nostalgic blaxploitation musical, it is more interesting as a historical artifact of its contemporary industry than actual entertainment.

80. (1939.) The Blue Gardenia (1953)
Did the protagonist kill her would-be rapist? Even she doesn't know for sure (and neither does the reporter who is starting to fall for her). I liked the suspense (if not always the acting), although the best part of this is seeing George Reeve in a supporting role as a dashing police detective. Bonus: the would-be rapist is Raymond Burr. 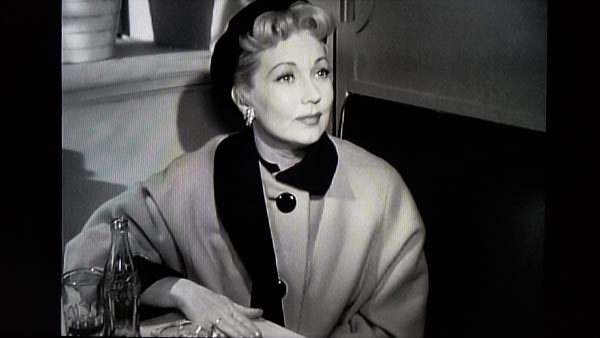 "I could just murder for a Coca-Cola right now."

81. (1940.) The Princess and the Frog (2009)
Somehow, I'd never seen this — Walt Disney Animation Studios' attempt to recreate the style of their 1950s heyday. I have no memory of its development or release. I must not have been aware it existed. Anyway, I have now seen it, and I quite liked it.

82. (1941.) Lunatics: A Love Story (1991)
This, I did not like. The story is embarrassingly simple, so I suppose the audience is supposed to be wowed by the characters or the visuals or something else that isn't there. I won't say it's unwatchable, but I will recommend that you not waste your time on it.