59. (1918.) Magic in the Moonlight (2014)
You know, in a lot of Emma Stone stone movies, I start by thinking "Gee, I don't care for this. Maybe I'm over Emma Stone." Then she wins me over again. As usual, Stone and Colin Firth are delightful, but, sorry, I cannot endorse a "follow your heart and the world is magical" fairy tale May/December romance from a writer/director who married his own daughter. Ick, dude.

64. (1923.) Gidget (1959)
Wait, I've never put Gidget on this list? I've seen the third act at least three times. I will never get tired of Cliff Robertson and James Darren fighting over Sandra Dee. 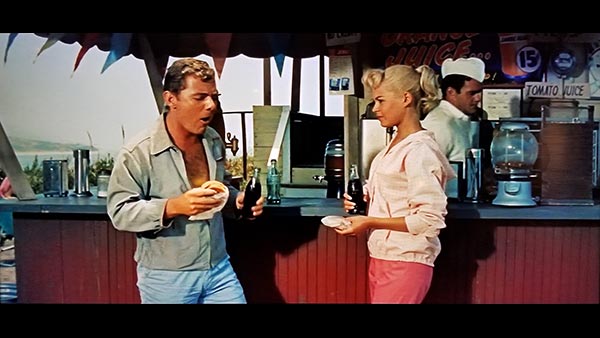 Get a beach body with Coke!

61. (1920.) Rafferty and the Gold Dust Twins (1975)
Some movies don't have much of a point. This odd couple road trip romantic comedy buddy movie adventure story is one of those. (To sum up: "We're all just hitchhikers on the road of life.") Is it enough for a film to just exist?

62. (1921.) Carefree (1938)
Unethical psychiatrist Fred Astaire manipulates Ginger Rogers in a film whose sexual politics have not aged well. (Speaking of not aging well, we get to see a hypnotized Rogers go on a rampage with a stolen shotgun because mass shootings were still "funny" in 1938.) It's got good song and dance numbers, though.