Nothing in Wriphe has any business being perfect.

The Miami Dolphins offered 13,000 tickets to their game on Sunday. Only ~11,000 were sold. Is that because people were scared of the pandemic, the weather, or being forced to watch the Miami Dolphins play "football"?

We all should have watched movies instead. Perhaps movies like these:

145. (1799.) The First Wives Club (1996)
Great cast, mediocre result. I'm always game for a buddy revenge comedy, but the movie lost me at the high-rise window washer scaffold misadventure, which would have been too silly for most sitcoms.

146. (1800.) The Red Shoes (1948)
Put this film in the category of movies disappointed by a bad ending. I admit that the dancing is pretty darn good, but having a real ballerina acting the part of the put-upon artist/romantic lead left an insurmountable hole at the center of the film, a flaw that was left badly exposed by the abrupt conclusion.

147. (1801.) Robin and the 7 Hoods (1964)
Frank Sinatra really loved gangsters, didn't he? His film roles are filled with bad guys with a heart of gold, such as here, where smuggling, counterfeiting, and gunfights are presented as victimless crimes. On the up side, this does A) prove that Peter Falk was a great comedic actor and B) introduce the world to "My Kind of Town." So not all bad, then.

148. (1802.) Smorgasbord (1983)
Nothing about this anthology series of loosely connected vaudeville skits *should* work, and very little of it actually does. There are a few genuine chuckles, but most of the skits are either terrible, one-note ideas or have had the comedic timing destroyed by director Jerry Lewis indulging performer Jerry Lewis's ego. (The editor is Gene Fowler, Jr, who also edited the abysmally paced It's a Mad, Mad, Mad, Mad World. So he probably deserves some blame, too.)

149. (1803.) Brewster McCloud (1970)
There's no way to describe this movie without making it sound absolutely nuts, so here goes: A bird-obsessed boy living underneath the Houston Astrodome avoids sex and builds a flying machine while under investigation for a string of murders. See? Nuts. There's also no disputing the fact that I loved it! The Player is still my favorite Robert Altman-directed film, but there's a new entry at second place.

150. (1804.) Never So Few (1959)
Is being a commando soldier really any different than being a gangster? Watching Frank Sinatra in the role, the answer would appear to be no. This dawn of World War II movie's plot examining the absurdity of the Rules of War is made nearly insufferable by the shoehorned inclusion of a romance with Gina Lollobrigida. 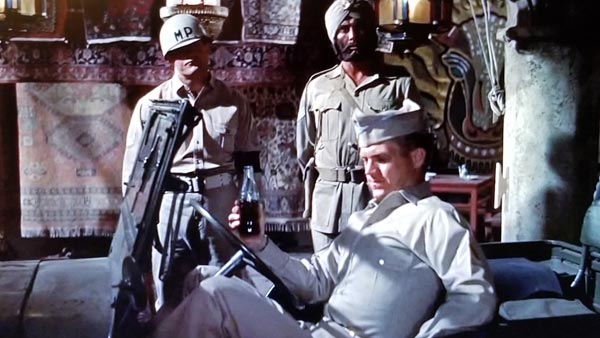 Take it from Steve McQueen: drinking Coke makes you cool!