A laugh's the best answer to all that's strange in Wriphe.

Last year, Auburn won on a prayer. Even that wasn't enough this year as UGA crushed the Tigers 34-7.

If it wasn't the coldest UGA game I've attended, it was close. And being a night game, the drunks were out in full force. (A UGA fan head-butted an Auburn fan 3 rows in front of us, and the dudes behind me insisted on yelling "faggot" at Gus Malzahn and the officials every 30 seconds. Not pleasant.) What made it tolerable was the Bulldogs' impressive on-field performance. Auburn was unstoppable on their opening drive, then never scored again.

We were all super excited to have Todd Gurley back. The poor kid came back from his month of NCAA-forced vacation only to tear his ACL. Should Missouri lose one of their final two games, Gurley will be unavailable for another shot at the SEC Championship. He'll probably never play ball for Georgia again. It's a disappointing end to a great collegiate career, and it makes taking a payment for his autograph seem like the right decision.

It seems likely that the Knowshon Moreno era with has come to an end in Miami. Moreno has been put on Injured Reserve after tearing his ACL in last week's loss to the Packers. He's done for the season, and it seems unlikely the Dolphins will invite the suddenly injury-prone Moreno (shoulder, elbow, and now ACL) back next year.

In March, I wrote, "If Knowshon does no better than [wide receiver Mike]Wallace's 2013 production, this will be a successful signing." Wallace has played in all 6 games, banking 313 yards and 4 touchdowns. Moreno has played in just 3 of 5 games so far this season (and 2 of 4 in the preseason), finishing only the season opener. In that one game, he rushed for 134 yards (the most for a Dolphins running back in a game since Reggie Bush left the team in 2012) and one TD. So by my own criteria, Moreno's time in Miami is a bust.

It's been a terrible week for UGA running backs in general. As everyone in America knows, Heisman-hopeful Todd Gurley was suspended by the team in advance of an NCAA investigation into illegal benefits (specifically accepting compensation for autographs). It's still up in the air whether Gurley will ever return to play for the Bulldogs, but I suspect that the Dolphins will be looking for a new running back in 2015.

No. 16 Clemson came to No. 12 UGA to start the season, and UGA was determined to avenge last year's 38-35 loss. Mission accomplished! 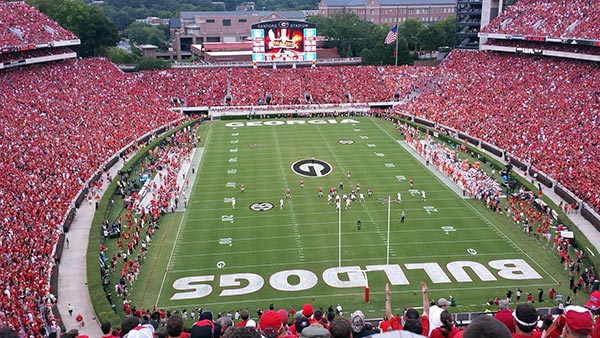 Clemson is still a good team, and they might have been better on the line than Georgia to start the game. However, they weren't as deep. Eventually, in the 4th quarter, the Bulldogs broke the game open, beating Clemson into submission with our relentlessly pounding running game.

1. Todd Gurley. I mean, great balance, great strength, great vision. He scored 5 touchdowns, including one 100-yard kickoff return. In years to come, this is probably the game that we will all remember as Gurley's signature performance.

2. The crowd. I mean, people everywhere. Maybe because it was a 5:30 kickoff and no one felt compelled to wear white (red, red, red), or maybe it was because the game was a tie into the third, but there was a huge crowd with great energy. In years past, when the crowd has been excited, there's been an undercurrent of desperation or anxiety. Not tonight. Whether because expectations were low after Murray, or because we were playing a non-SEC opponent, whatever the reason: excitement without the fear. What a great way to open the season!

3. The heat! Hotest game I've ever been to. Kickoff temp in the mid-90s, humidity you could see, no breeze, and the sun hiding behind clouds so that your sweat didn't evaporate... brutal. I'm sure the heat is the main reason Clemson folded in the 4th, and I commend UGA trainers and coaching staff for getting our players ready to play and mostly cramp-free.

Today's Tennessee/UGA game was like none other I'd seen in Sanford Stadium, and not because the Pride of the Southland Marching Band only played "Rocky Top" 16 times. It started as expected with the Bulldogs jumping out to a huge lead against the rival Volunteers. By the end of the first quarter, the Dogs led 21-10 with the Vols only touchdown coming off an interception return.

Everything pointed to a rout in the making, so I felt comfortable to go to the concession stand to buy a pretzel and Coke. This took forever, as lines were long with carefree fans, and the first concession stand I went was sold-out of pretzels, forcing another wait in different, longer line. While I was queuing, I saw Todd Gurley score again on the closed-circuit television and figured we'd be going home from the game early. How wrong I was.

I returned to my seat in the nick of time to watch Georgia turn the ball over twice inside the 20-yard line, essentially giving Tennessee a tie going into halftime. Things didn't get much better in the second half as UGA just couldn't put Tennessee away. Georgia prevailed in the end with a couple of timely interceptions by Sanders Commings, but with 95 points in a very long game, this did not turn out to be the afternoon/evening that anyone in attendance had expected.

I should point out that I went to the game with Dad, a Georgia Tech graduate. Today Georgia Tech lost to Middle Tennessee State, 49-28, and the news of that final score surprised everyone who heard it. However, everyone didn't hear it at the same time. Throughout the game it was very amusing to hear exclamations from various people as they discovered the final score in the Tech loss, each new shout of discovery triggering a grimace from my father. Good times, good times.