Photography takes an instant out of time, altering Wriphe by holding it still.

Did I mention that I no longer have Charter cable? They decided to go "all digital," which for them was just an excuse to require us to pay an additional rental fee (minimum charge: $8) for new set-top boxes for every television we wanted to use. So the CRT television in my room became a large paperweight overnight.

I couldn't stand having no TV in my room while I code, so I bought a new one just for Chromecasting. All I needed was something small with an HDMI input. Sigmac may not be a name brand, but the price was right. I'm happy with everything about the television except for one thing: the picture on the box.

Maybe I watch too much football, but that is clearly Terrell Owens (#81) stiff-arming Ray Lewis (#52). Given that T.O. was only a hero for the Eagles for one season, this picture must have been created in 2004/2005. (T.O. destroyed his own career with the help of super-agent Drew Rosenhaus the following year.) Maybe I play too many video games, but that makes it obvious that this must have been a promotional image for the ESPN NFL 2K5 video game (which used Terrell Owens as its cover model). 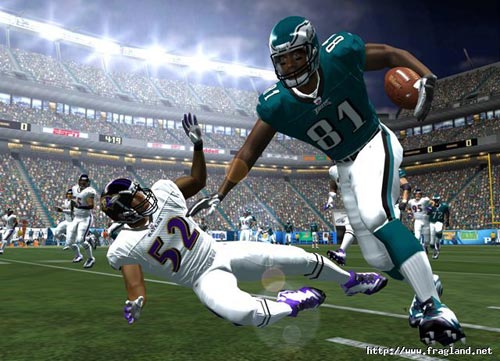 If you look closely at the box, you might notice that Sigmac has erased the "ESPN," "Riddell," and NFL team names, but they didn't really do anything about the "Sega" logo, the "Wilson" logo on the ball, or the NFL shield on the jerseys. Did anyone approve the use of this image? If skipping out on licensing fees is what kept the price so low, I guess won't tell anyone.

(Footnote: 2005 was the last year that Sega produced its NFL 2K5 game. The game was a huge hit, both critically and financially. Some say that Sega cancelled the franchise because competitor Electronic Arts signed an exclusive contract for naming rights with the NFL, but most of us know that the real reason was Terrell Owens' appearance on the game's cover. So in one season, Terrell Owens managed to scuttle his own career, the Eagles chances of returning to the Super Bowl, and an entire video game franchise. That's an impressive hat trick.)