Wriphe is a hungry thing.

While I'm about the last person that you would expect to hear spouting theology or philosophy (I'm too damned secularly cynical to spend much time with intangibles such as hypothetical situations or metaphysical postulations), but sometimes things happen which make even me wonder "why?" In this particular case, that thing was the discovery of this cover: 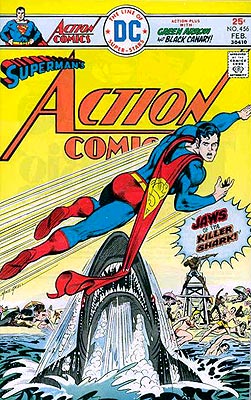 But it's not quite the "why" you think it is. I understand the obvious "why." This is Action Comics #456, cover dated February 1976, so it was released around December 1975. It just so happens that the biggest grossing movie of 1975 was, as you can probably guess, Jaws. No big surprise there. Superman never misses a chance to get in on the action. He's dealt with all of the great political and social events of the 20th century, from nuclear proliferation to illegal aliens (from space, 'natch) to women's liberation to the Olympics (of space, 'natch). Why just a few short years after this issue, Superman will enter the ring with World Heavyweight Boxing Champion Muhammad Ali (in space, 'natch).

Now the odd part of this all, and what makes me wonder "why," is that I decided that I liked that Action cover so much, I was going to use it in today's blog post. And then a brief research turned up the fact that Jaws was originally released on June 20, 1975, exactly 33 years ago today. Great Caesar's Ghost!

Now, was this a happy cosmic coincidence? Did I know, perhaps subconsciously, that Jaws was released on June 20 before I started prepping this blog entry? In any event, I'm sure I'll never know because I'm not going to investigate. No one has ever said, "I'll solve the fundamental workings of the entire universe, and then I'll understand aliens, ghosts, and Celene Dion," without rounding the bend. It's the investigation of situations like these that lead to mad scientists and super villains, I tell you.

Oh, and don't worry about Superman. He's been effortlessly beating up sharks since 1939. His boat is already plenty big enough, so to speak.