When I hear somebody sigh, 'Wriphe is hard,' I am always tempted to ask, 'Compared to what?'

Back in February, I expressed my enjoyment of NBC's Powerless and said that it probably wouldn't make it past May.

The show was officially canceled last week by NBC, which had pulled it off the air last month with two episodes still unaired. What a shame, too. The show was just starting to find its footing as it dug deeper into DC's toy box, introducing live action versions of the Olympian, Jack O'Lantern, and Green Fury, all members of the criminally underappreciated Global Guardians.

What other wonders did the show have up its sleeve? Would future episodes have brought us founding Global Guardian member Godiva, the woman with prehensile hair? Or Owlwoman, a Native American with the powers and abilities of an owl? Or the immortal African king Doctor Mist? The world will never know.

So long, Powerless. I'll see you in the funny pages.

The series (at least the pilot episode) was tooled to long-time DC Comics fans like me. Many fan reviews online claim the show is a DC version of Marvel's Damage Control comics, but that's not quite fair. For decades, one of the biggest differences between the Marvel and DC comic universes was the way the general public responded to super heroes. Marvel citizens lived in distrust and fear, while DC citizens tended to embrace their supermen (at least until DC saw how much money they were losing at the box office to Marvel movies and made their worlds much, much darker places to live). The characters in this sitcom are definitely old school DC denizens, the sort who would be employed by Hero Hotline.

If you're the sort of person who has heard of Damage Control and Hero Hotline, this show is aimed squarely at you. Since the series takes place inside a four-color comic book world, characters are bright, and reminders of DC's enormous cast of heroes and villains are dropped early and often. A heavy emphasis is placed on the trappings of Batman comics — which only makes sense given that Batman has been DC's best seller for going on thirty years. But that's not really the good stuff. This is the good stuff: 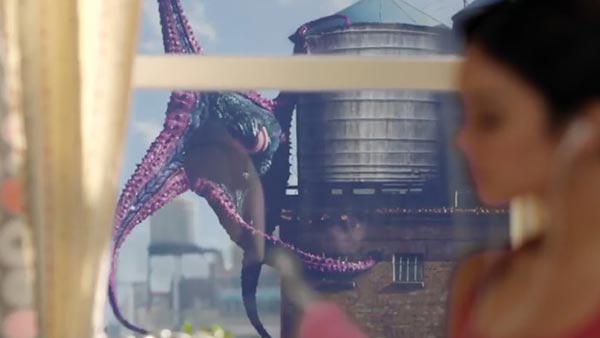 Look! It's Starro the Star Conqueror, the first Justice League villain, making a throwaway cameo appearance! Starro is essentially a giant purple space starfish who mind-controls heroes to do his bidding by putting tiny clones of himself on their faces. That's the Silver Age of comics in a nutshell, a generation better suited to comedy than dour Zack Snyder action films (which, frankly, aren't suitable for anything).

The Powerless pilot also references such minor DC characters as the Global Guardians' Jack O'Lantern and Justice League Europe's Crimson Fox, neither of which is exactly a household name even among people who consider themselves DC Comics fans. Most of these references are used as setups for punchlines, but it's still a pretty niche market.

Unfortunately, Powerless dedication to aging comic book fans may mean it's not long for broadcast television. The pilot only attracted about a million viewers. That's not a good start. TV By The Numbers gives the show a 50/50 chance of making it past May, which is a shame. Even Working got three seasons.

Ken Posted Feb. 9, 2017 at 10:18:45 AM
That is probably the first and last time we will be seeing Starro. Which is a shame. A truly alien, non-humanoid menace seems rare in comic book movies. I'm not sure there's been one.

Wriphe [Official Comment]: Posted Feb. 9, 2017 at 11:22:57 AM
The second FANTASTIC FOUR movie featured a non-humanoid Galactus, so I think that counts (even though the comic book Galactus -- the REAL Galactus *ahem* -- was definitely humanoid).

And now that I think about it, what about Parallax in GREEN LANTERN? I think it counts. (What about Phoenix from the third X-Men movie? Technically, the movie Phoenix was Jean Grey and not an extra-terrestrial energy being, but it was sort of a cloud, right? Does it count?)

Ken Posted Feb. 11, 2017 at 11:51:23 PM
Galactus wasn't Galactus. But I'll give you that it was non-humanoid. I don't remember enough about the Green Lantern movie to say, but I do know the comic Parallax was non-humanoid, so okay on that. And no, Phoenix is humanoid.