Never be in a hurry. You'll miss the best parts in Wriphe.

Seen at a CVS in LaGrange, Georgia: 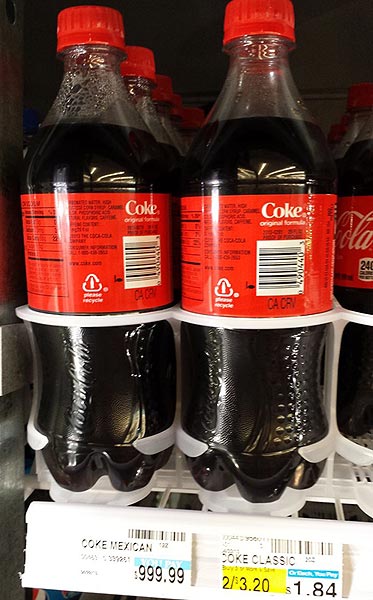 There are those who believe that High Fructose Corn Syrup is terrible for us, and that we should consume more natural sugars. There are those who believe that Mexican-produced Coke tastes significantly better than American-produced Coke. I'm sure those living in the intersection on the Venn diagram of those two groups would be willing to pay a little more for Mexican Coke, but $1,000 a bottle seems a little high. It's Coke, not petroleum.

As someone who drinks a lot of Coke — I don't know who you are, but I probably drink more than you do — I can't say as I taste a big difference between American- and Mexican- produced Coca-Cola. For $998 worth of difference, I'm going to need a taste difference that I can notice. It probably would need to taste like I was drinking liquid angels!

For the record, yes, I know that the two bottles in this image are both American-made plastic, high fructose corn syrup bottles. I have no idea if CVS knows the difference between American- and Mexican-produced Coca-Cola or not. Frankly, if someone in LaGrange is willing to pay $1,000 to drink a regular bottle of Coke, he is probably getting what he deserves. (Or he works for the Pentagon. They're kind of bad with money.)

Ken Posted Jul. 24, 2013 at 01:05:34 AM
Was in Cancun for a week recently, and all over the Yucutan Peninsula. Drank a lot of Mexican Coke. And this I can tell you: The quality and taste varied a LOT from place to place. Fountain Cokes were mostly what I had, and the biggest problem with those was universally the carbonation was too low. The bottled drinks differed too, and I'm betting the quality/specifications adhered to by the various bottlers there varied a lot more than it does here.