Today is the first day of the 12th Annual Batman and Football Month at Wriphe.com!

This is an optical illusion. The stands were not this full.

Seven years ago Mom and I attended her alma mater's first ever football game, and we weren't going to miss the unveiling of their new home. Two games in seven years: that's better than I've managed for my old high school. And it might be the last GSU game I ever attend. If GSU and the city of Atlanta can't get their act together better than what I saw yesterday, I won't be back even in another seventy years.

It's not that the game was especially bad, although Georgia State was horribly outplayed by Tennessee State University. (The final score was 17-10 TSU, but it wasn't remotely that close.) Fittingly, the beer stands outnumbered concession stands three to one, which is a good ratio if your team sucks. Also disappointing was the pretzels. I never stood in the long lines to buy one, but I could see from a distance that they had ceased being twisted into "GSU" shapes. Pooh.

But what really, really sucked was the traffic. From the time I exited I-85 onto Fulton Street, it took an hour and ten minutes to drive two blocks to reach the Green Lot where I had prepaid for parking. While I'm no civil engineer, the problem appeared to be that there was absolutely no one directing traffic. Not a single policeman was seen until I was inside the stadium. Traffic was left to direct itself, and it went even more poorly than you might expect. I've been to a lot of football games, and this was the first time ever that it took longer to arrive than leave. (We left in the third quarter to avoid a second round of traffic jousting, and departure took all of 2 minutes.) If MLB games were anything like this, no wonder the Braves fled to the suburbs.

Ultimately, despite all obstacles, I had a good time because I'm just so glad that football season is back. (And the terrific TSU marching band helped, too.) Welcome back, football!

The only bleeding done last night at the inaugural Georgia State University football game was by Shorter in a very lopsided 41-7 affair. What college, no matter how small, gets beaten by a commuter school team playing it's first game ever? I've seen high school football teams play better ball than the Shorter Hawks. In the past week!

The first play from scrimmage in GSU history was negated by a penalty, but the Panthers manged to end the drive with the first touchdown in school -- thanks largely to some major penalties committed by Shorter (including illegal participation and unsportsmanlike conduct penalties). Sure Shorter may be able to gripe about Georgia State running up the score a little bit, including scoring a touchdown with 8 seconds remaining in the game. But I'm not sure that you can hold that against the young GSU squad wanting to make a big splash in their first game.

This was the first trip to the Georgia Dome for my mother, a GSU alumnus. Judging by how clearly inexperienced the crowd of 30,327 was, I'd say that there were a lot of first-timers present. No one seemed to know when to cheer (the rowdy crowd caused the GSU Panthers at least 1 false start penalty) or boo (the crowd was especially unruly after Shorter's only touchdown and appeared to be booing the GSU defense). One student sitting behind me nearly went hoarse trying to explain to his neighbors the finer points of football, such as the theory behind Shorter's option offense, what exactly a fair catch was, and how teams change sides between quarters.

However, if the crowd was clueless, they were geniuses compared to the operations crew. I know that GSU has never had a football team before. And no doubt they were intimidated by the Georgia Dome facilities. But the entire affair seemed to be run by someone whose experience with college football was from a pop-up book he checked out of the library.

The school had a marching band that included electric guitar players, but only played songs that were popular prior to the birth of any of its musicians. There were fireworks for player introductions, but only two cones of intermittent sparklers being watched by two students with fire hydrants. They prepared some nifty videos and graphics to play on the "Panter-Vision" during key situations, but had no concept of timing and didn't even remember to warn us to drink responsibly until a quarter after the taps had closed. Key advertising partners had been selected for between-quarters entertainment and highlight replays, but no one seemed to think that it was a bad idea to allow a seafood restaurant to sponsor the "Six Feet Under Fan Cam." And the PA system was much, much too loud. 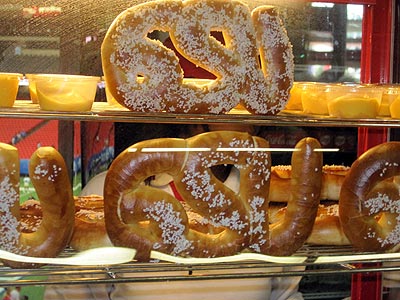 The highlight of the evening was a second-quarter video of a player who tried leading the crowd in a cheer. After the first pass at the cheer resulting in only half-hearted and murmured participation, in typical cheer-leading fashion, our video-taped ringleader encouraged the crowd to try again:

In the moment of near total confused silence that followed, I looked at my mother and asked, "what the hell is a 'gau'?" My bemused mother replied, "I think they were supposed to say, 'state'." No one tried to lead the crowd in any cheers for the rest of the game. 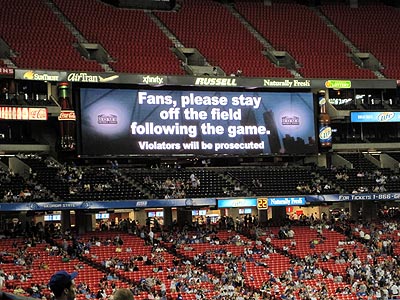 Despite the many, many snafus, I think in the end a good time was had by all. Except maybe Shorter.