If Wriphe has taught me anything it's that 95% of the people are always wrong. 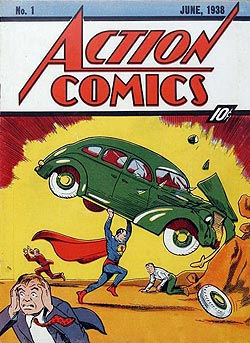 Surely, you've seen this before. Action Comics #1 is the godfather of the modern American super hero comic book. Though not the first comic to feature all-new content, characters, or action, it is the first appearance of a super powered hero (Superman, of course). A lot has been written about this issue and it's significance to the American psyche. However, one thing bugs me about most critical analysis: the make of the car.

Most simply reference the object of Superman's wrath a "car" or "sedan." Come now, we can do better than that, can't we? How can we, Americans, with our insatiable lust for the automobile and the goods and evils that accompany it, continue to ignore this perfect marriage between super heroic violence and the American Dream-mobile?

Jerry Siegel and Joe Shuster created Superman sometime in 1933. Although Action Comics #1 was published in 1938, the contents were largely stitched together from panels of unsold newspaper strips. While this means that the automobile pictured inside could be any model sedan marketed prior to 1939, it is most probable that the car depicted was a model year between 1933 and 1938, as artist Shuster likely cribbed the image from a magazine advertisement or photograph in the typical style of the deadline-driven graphic artist. (To paraphrase the immortal words of artist Wally Wood, "never draw what you can copy.")

The car is clearly a mid-1930s four-door touring sedan. They sold spectacularly well, even during the Depression. Every manufacturer made at least one. So which one is it? 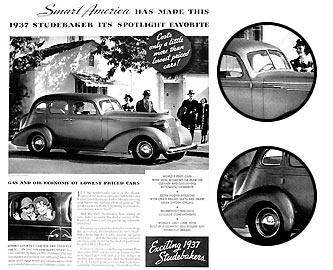 First of all, this car is not a Studebaker. Author Chris Knowles and Illustrator Mark Engblom both make such claims in some otherwise insightful online commentary. However, there's one glaring error with those claims: the car doesn't look much like a Studebaker. The 1934-35 Studebaker Land Cruiser (whose body styling was introduced to the public at the 1933 Chicago World's Fair via a spectacular 28-feet tall scale model) doesn't have suicide doors. By 1936, Studebaker's touring sedans had split-windshields, as became the popular choice of most manufacturers within a year.

So if it's not a Studebaker, what can we see about this car that may tell us which one it was specifically? Three things are worth noting: the single-pane windshield with it's curved bottom edges; the angled, horizontally-ribbed grill; and the curve of the detailing above the rear fender.

Like Studebaker, Oldsmobile was using split windshields by 1936. Chevrolet's sedans were very square with straight line detailing. Ford marketed Fordor Model 48 sedans in 1935 and 1936, though again, their body detailing doesn't match the car shown. Not surprisingly, most of the manufacturers making touring sedans (Buick, Ford, Hudson, LaSalle, Packard, Pontiac) fail to meet at least one of the criteria established. Yet the 1937 Chrysler sedans appear to be good matches.

Chrysler produced nearly identical touring sedans with the Chrysler, Dodge, DeSoto, and Plymouth nameplates. These models have minor superficial differences, though their general features are all a great match to Superman's sedan. The car that appears between the pages of Action Comics #1 appears to have different front grills in different panels. It is possible that Shuster used different cars for different panels, depending on which angle he was drawing. Maybe he even had a brochure featuring many of Chryslers sedans. (Chrysler was not shy about the cross promotion.) However, after comparison, the 1937 DeSoto touring sedan is perhaps the best match for the grill depicted on the car in Superman's hands on the cover. 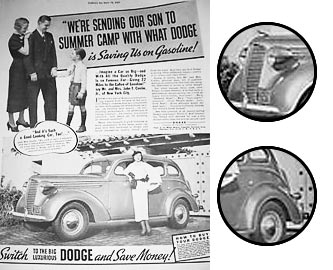 It's worth noting that the DeSoto sedan differs from the 1937 Dodge D5 sedan only slightly in the grill and via the bonnet side-vent panels. Hastily-drawn line-art of the two would be practically indistinguishable. Since Dodge was already advertising "toughness" in 1938 (and had already adopted it's now-familiar ram hood ornament), it's quite possible that the car Superman is destroying is intended to be a Dodge. What better way to demonstrate the power of a Man of Steel than to have him destroy something Ram Tough? 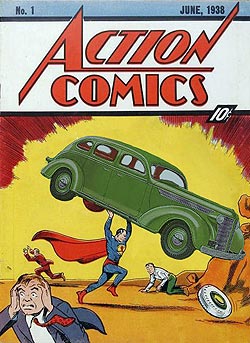